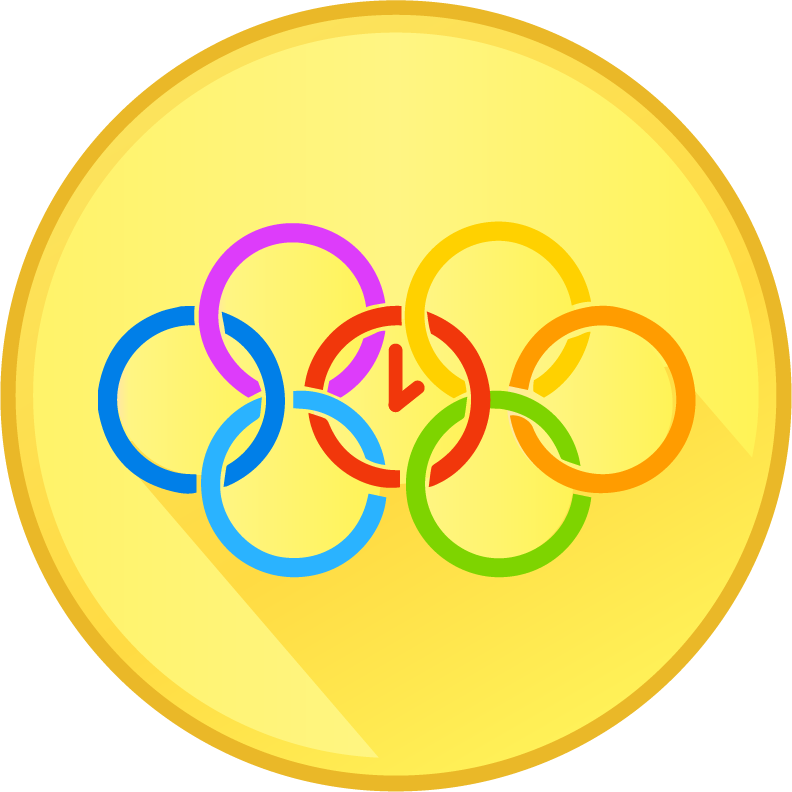 Over the last few years, in search of the optimal day plan, our team at Owaves researched and/or interviewed over fifty Olympians, Paralympians, Olympic and Paralympic candidates with a combined total of over 100 medals. We examined their daily routines, meal plans, sleeping rituals and workout regimens. While some of the findings are expected, there are a few high-level lessons that merit highlighting:

Malcolm Gladwell defined this concept in his book Outliers: The Story of Success, studying the rise of Bill Gates, Tiger Woods, the Beatles and other phenomenal success stories. In order to become a master at your craft, he determined through his research, you have to dedicate at least 10,000 hours. This is the minimum threshold of focused experience that will set you apart from amateurs and the rest of the world.

We see this phenomenon clearly in the elite athlete community. Michael Phelps started swimming competitively at age 7, and already held a national record for his age group in the 100-meter butterfly by age 10. According to his coach, Bob Bowman, Phelps didn’t miss a morning practice from the age of 11 through 16 years-old. He would practice on Sundays, birthdays and Christmas mornings to keep his competitive edge. At an average of four hours per day in the pool, this meant Phelps had already shattered the 10,000 hour rule by the time he competed in his first Olympics at Sydney in 2000, as the youngest male to make a U.S. Olympic swim team in 68 years.

Simone Biles started gymnastics at age 6 and began training with a professional coach at 8 years of age. Before starting high school, Biles switched to homeschool in order to boost her training hours from 20hrs/wk to 32hrs/wk. Her parents even built a gymnasium nearby their estate in Spring, Texas to reduce her commute time to less than ten minutes. The approximately 6,000-7,000 hours of training she received during her homeschooling years, combined with her previous training, ensured she also crossed the 10,000 hours mark before competing in her first Olympics at Rio in 2016. At the age of 19, she then set the national record for most gold medals in women’s gymnastics at a single Olympic Games.

Katie Ledecky started swimming competitively at age 6, and had already qualified for an Olympic trials by eighth grade. She spends 4-6 hours each day in the pool – not counting her dry land workouts and physical therapy. Estimates put her over 15,000 hours heading into Rio, where she broke multiple records and won four gold medals at just 19 years of age.

During an average day, if an Olympic athlete is not sleeping, eating or recovering, they are typically in the gym or on the field honing their craft. See 6X USA Olympic medalist Aly Raisman’s daily routine, for example: 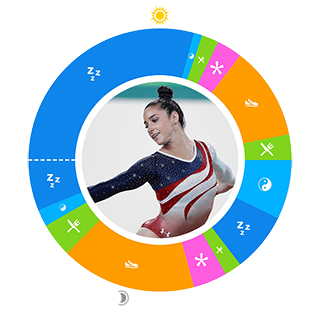 In pharmacology, the “entourage effect” is a term used to define how an active ingredient may rely on the synergistic properties of neighboring compounds in order to produce a beneficial end result. This understanding helps to explain why consuming whole fruits and vegetables is more beneficial for the human body than isolated vitamins and minerals. The fibers and organic milieu of phytochemical nutrients are more powerful in combination than any single ingredient on its own.

The entourage effect for individual success in elite sports proves to hold as well. Did you know Michael Phelps has two older sisters, Hilary and Whitney, that competed at the collegiate and Olympic level? Both set records during college, and Whitney qualified for the Olympic trials in 1996 and 2000. Phelps’ mother moved the family when he was four years-old to within eight miles of the North Baltimore Aquatic Club so his sisters would have better access to daily training. At nights and weekends, Phelps would hang out with his sisters’ older friends – mostly experienced swimmers who were competing for Olympics spots. At the aquatic club, Phelp’s met Bowman who became his head coach from age 11 through retirement. Bowman was already coaching future Olympians when he met Phelps…

Olympic and Paralympic athletes are the result of family encouragement and support from an early age, along with a dedicated team of trainers, rehab specialists, sports psychologists, managers and agents. As Bowman summarizes, “In truth, Team Phelps is dozens of other people… a collection of ‘personal coaches.'”

Serena Williams hits tennis balls every morning since a very early age with another Olympic athlete, her sister Venus. The two lived together until quite recently, and now live across the street from each other in a Florida suburb. Neymar‘s father is his manager, and both Biles and Allyson Felix have brothers that fill the role. Felix’s head coach for over a decade is Bob Kersee, husband and former head coach of Jackie-Joyner Kersee, one of the greatest female athletes of all-time. Kerri Walsh-Jennings‘ husband is a professional volleyball player and is frequently seen coaching and supporting her from the sidelines. Oksana Chusovitina’s husband is a former Olympian and her coach is a former Olympic teammate and lifelong friend. Ashton Eaton‘s wife and training partner, Brianne, won a bronze medal in the Olympic heptathlon at Rio. Ledecky’s mother was a collegiate swimmer, and Katie began swimming after watching her older brother compete. Since his rookie year, Lebron James has been working out daily with Michael Jordan’s former personal trainer, Mike Mancias…

Perhaps the most interesting finding came through research of Olympians with longer than average career spans. While most of us would believe great athletes are simply born with a natural desire to excel — often their will to win is nurtured consciously with manual effort. Trainers and coaches will purposefully orchestrate goal sessions, detailed visualizations and other daily practices to artificially grow their athletes’ “hunger” for excellence.

Consider, for example, Chusovitina, the 41 year-old Uzbek gymnast who competed in a record-breaking seventh consecutive Olympiad at Rio. As her career progressed, she has devoted an increasing segment of her daily training regimen to “visualization” and “mental preparation”. As Chusovitina’s coach summarized to ESPN, “While maintaining the physical strength and ability for the sport is hard enough, it’s keeping the passion alive for so many years that is the hardest…”

USA cyclist Kristin Armstrong, after winning her third consecutive gold medal on the eve of her 43rd birthday and becoming the oldest female cyclist to win an Olympic medal, told future Olympians at Idaho State University the hardest part of her training was not physical. Rather, it was to not to let negative ideas seep into her mind about what she’s capable of:

“My takeaway from Rio was you have to stay your course. You have to follow your vision…

After 12 years as a professional cyclist and three times winning the gold medal, my success always came back to my why. You have to know why you’re doing it. And it comes back to my vision…

A vision is one of the most powerful things you can have in life. A vision is a mental picture of a result you want to achieve — a picture that’s so strong and so clear, it helps make that result real.”

The practice of manually building will power actually begins much earlier in Olympic athletes’ careers. Below is Phelps’ list of goals and target times for various strokes — at just eight years of age. At his coach’s instruction, Michael would post the lists on his fridge to ensure he saw it daily…

Perhaps the most sobering finding from placing a magnifying glass on the daily lives of our world’s most elite athletes, is that they are just as human as the rest of us. Mental health is a commonly ignored topic that impacts these premier athletes at rates equal to, if not greater than the rest of us. Phelps’ ADHD diagnosis at age 9 is actually one of the reasons his mother became passionate about his swimming practices, because it helped him focus and stay disciplined. Phelps also battled alcohol abuse and depression later in his professional career, and now advocates for mental health awareness and de-stigmatization:

“That’s scary as hell… Thinking about taking your own life, I remember sitting in my room for four or five days not wanting to be alive, not talking to anybody. That was a struggle for me … I reached that point where I finally realized I couldn’t do it alone… I want to be able to get out in front and talk and say ‘Look, yes I’ve done these great things in the pool, but I’m also a human. I’m also a human like some of the people in this world who are going through the same exact struggles that I have… I want people to understand that there are times that you are going to have to reach out.”

Brianne Eaton summarizes the post-Olympic void that commonly triggers mental health symptoms for these athletes on her blog:

[I’m] a 28-year-old Canadian, retired professional track and field athlete who has no idea what she’s doing with her life. (Yes, I’m being 100% serious.) Let me explain…

For the past 10 years, I’ve dedicated my life to winning an Olympic medal. After graduating from the University of Oregon, I got an agent, went pro, signed a contract with Nike and set off to make my dreams come true. In 2016, I won an Olympic bronze medal in the heptathlon…

But this dream couldn’t go on forever and after the Games, I decided it was time to walk away from sport as I felt I’d achieved all that I wanted to. This left me wondering, “What the hell do I do now?!

USA fencer Kelley Hurley echoes, “You feel a little empty… Everything that you did all came up to one point, and now it’s over and the new chapter begins, and where to start writing?” U.S. Olympic Committee sports psychologist, Karen Cogan, describes, “You work so hard… You put everything into it, and some athletes, their performance is over in a matter of seconds, literally. And then it’s done, and now what?” Each athlete handles this anew search for meaning and purpose differently, and given their unique circumstances and level of personal support, may fall victim to anxiety, depression or feelings of worthlessness.

Other related common mental health aspects seen among this group is a high degree of perfectionism, obsession, compulsion, and resultant nearly unattainable measures of gauging internal success. A silver medal winner may consider him or herself a “failure” depending on the circumstances: 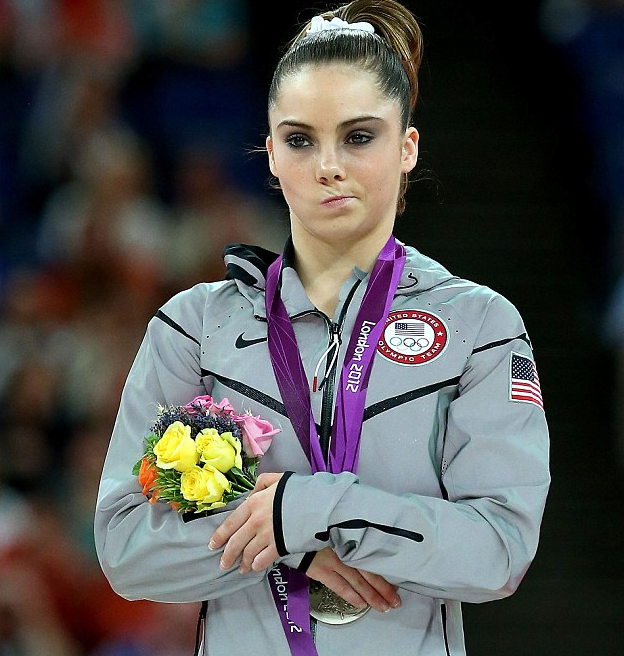 Margaux Isaksen, 24, a modern pentathlete and 3X Olympian, finished fourth at the London Olympics in 2012 — very close to a medal. “I just remember thinking, wow, if I had run a second faster, or I’d got one extra fencing touch, then I would have a medal. And I just came home and I felt so defeated and so sad…” After finishing 20th in Rio 2016, she went into what she calls post-Olympics depression. “It makes you feel sort of worthless. It’s a really strong word, but that’s kind of how I feel right now. I really feel like I’ve let myself down, let my coaches down, and that’s hard. And then you don’t know if you want to put yourself through that again.”

Click here to view our capstone infographic on the topic: Olympian Day Plans. For further reading, see: #Plan2017 Like an Olympian and Olympic Day Planning.