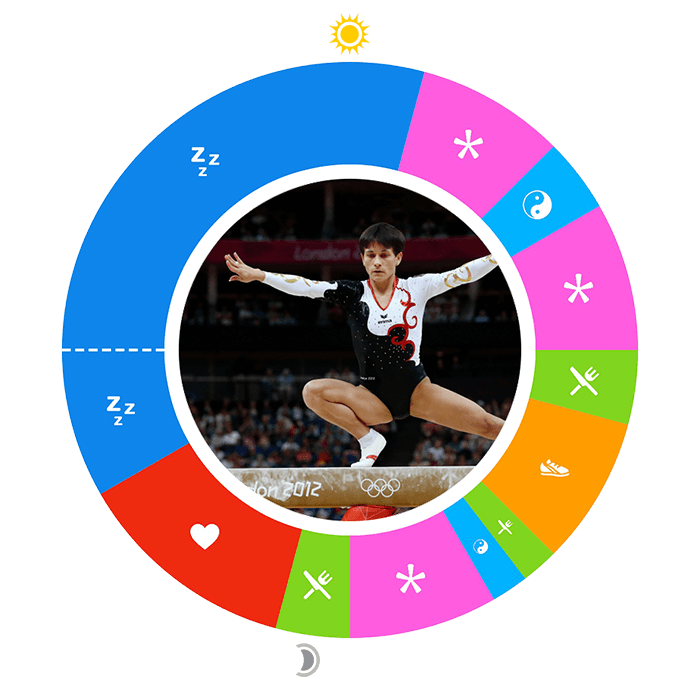 Day in the Life:
Oksana Chusovitina

At 41 years of age, Oksana Chusovitina is the world’s oldest Olympic female gymnast and has solidified her position in history as one of the world’s greatest athletes. She has competed in seven consecutive Olympiads, winning two Olympic medals, 11 World Championship medals, USSR Junior Nationals and holding the record for most medals won in a single event at the World Championships (nine on the vault). Officially declared an “Honored Athlete of the Republic of Uzbekistan,” Oksana is even commemorated on a postal stamp in her home country.

In the 2016 Olympics, her 17-year old child was the same age as some of her competition… She is nearly twice as old as the oldest U.S. gymnast in Rio, 22-year old Aly Raisman who’s called the “Grandma” of the Final Five. For added perspective, Oksana won her first Olympic medal in 1992 at the Barcelona Summer Games – five years before current sensation Simone Biles was even born.

Oksana is also one of only a handful of Olympic athletes to compete after becoming a mother. Given her son suffered and eventually defeated leukemia, forcing the family to move to Germany to aid his treatment and recovery, Oksana’s story is also one of resilience.

During and after her seventh Olympic performance this summer, Oksana dutifully shed some light on her daily routine for an unparalleled quarter-century career:

Interestingly, Oksana reports a better work-life satisfaction with age. Whereas youthful gymnasts will literally eat, sleep and work around their career, Oksana has found the personal freedom as she ages to spend more quality time with her family and friends. She believes that, since her muscle memory is older than most of her competitors, it’s mostly about the mental preparation and staying inspired and motivated for the competitions. Especially when it comes to preventing injuries, more hours in the gym is not necessarily a good thing. As Oksana told ESPN:

At this time, I don’t need much physical training… I do a lot of mental training. I have muscle memory that my body has developed over the years. I typically put in two to two-and-a-half hours in the gym. And then I visualize exactly how the skill needs to be done. I do this in my head, and when I get to the gym, all the mental preparation that I did after breakfast or just walking around, it just transfers to the gym and, if I’m vaulting, I know exactly what my body needs to be doing. I know exactly what I need to be doing to get a better execution or a better height or a better landing.

Another key element of Oksana’s longevity on the world’s stage is her lifelong friendship with former teammate and now coach Svetlana Boginskaya. Svetlana, called the “Belarusian Swan” and “Goddess of Gymnastics” during her heyday of the 1980’s, won gold with Oksana at the 1992 games for the “Unified Team” composed of athletes from former Soviet countries.

Chusovitina credits Boginskaya for keeping her sane during the Olympic lead-up, and appreciates having someone her own age to talk to. The conversations revolve around their children, politics and fashion — anything but gymnastics itself. It’s a far cry from many of her younger peers who live, sleep and breathe the sport.

Svetlana can frequently be heard telling Oksana to slow down. “Sometimes I have to tell her, ‘You’re not 14 or 15 years old anymore. You should not be doing so many repetitions…’ She doesn’t need many repetitions. She has muscle memory from 1992,” Svetlana told Elle magazine. “At this point, I cannot promise she will retire… I would like for her to live a normal life, but I think her normal life is a gym life.”

“I will retire on Monday. I cannot tell you months, days, or years, but it’s going to be a Monday,” Oksana retorts. She credits genetics and her training regimen for staying fit. But it’s her dedication and love for gymnastics that make Oksana “always eager to train. I have no pain, no problems. The toughest for me is to wait until the next training.”