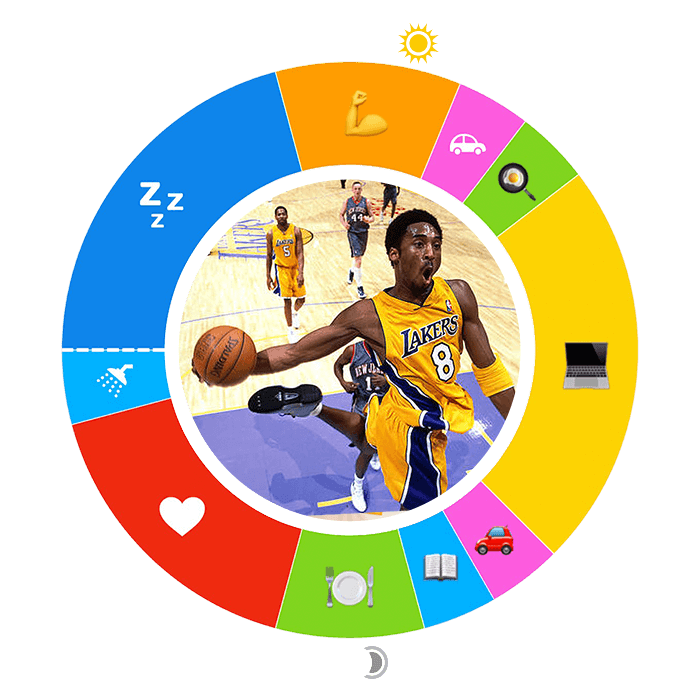 Day in the Life:
Kobe Bryant

Owaves would like to commemorate the life and legacy of Kobe Bryant through showing his devotion to the game of basketball as well as his emphasis on family time. He was a caring father, outstanding basketball player, and devoted teammate. Bryant’s unwavering optimism inspired many to work toward their goals. In short, he proved to be an outstanding role model for the old and young alike.

After five championships, fifteen All-Star Game appearances, and two NBA Finals MVP Awards, Bryant decided it was time to hang up his shoes and retire his jersey. Bryant’s body was hardly able to take the constant impact associated with such a physically demanding sport, after playing 20 years of professional basketball. It was finally time for his retirement from the game.

Although financially he could have easily supported himself and his family for the rest of their lives, his internal motivation and drive kept him wanting to achieve more. After a few months of recovery, he resumed his strenuous early morning workout schedule. He started a venture capital fund with his good friend Jeff Stibel, which he spent most of his days working on. All the time in between was devoted to his family, including cooking meals for them and driving his daughters to and from school.

“The most important thing is to try and inspire people so they can be great in whatever they want to do.”

Wake Up & Work Out

It is no surprise that Kobe Bryant still woke up long before the sun rose, eager to get his morning workout in. There are a few reasons why Bryant still maintained such a vigorous workout routine. He noted that one of the most challenging aspects of his new daily routine was finding something to work towards and creating specific, measurable goals. While playing for the Lakers, he was constantly striving to win the next NBA Championship. However, once his career ended, so did these goals. After giving his body a few months’ break, he ultimately decided it was time to begin working out again.

In collaboration with Nike, Kobe Bryant created and lead the Mamba League, a basketball program dedicated to coaching young aspiring basketball players. The league provides an opportunity for young girls passionate about basketball to play and learn from other female athletes. Kobe wanted the program to inspire and teach young athletes the importance of work ethic and teamwork.

“The Mamba League is a fun league for kids to learn the game, have fun, but also understand the connection the game has with life in general and convert that into being a better son, a better daughter, a better student.”

After years of constantly being away from his wife and kids due to his demanding basketball schedule, Kobe Bryant could finally devote more time to family in his years of retirement. Often Bryant’s day began with his daughter accompanying him to the gym, despite the early wake-up:

“When I get up in the morning [to exercise], my daughter goes with me,” he told Howes. “She goes with me before school and it becomes a daddy-daughter thing. Through that process, she understands the value of hard work.

His day continued with breakfast with his wife and driving his daughters to school and practice. Once in a while, Bryant would even surprise his family with trips to exotic places to fully enjoy his newfound flexible schedule! At the end of the day, Bryant noted that family was what kept him motivated to achieve his goals.

● Day in the Life: LeBron James

● Day in the Life: Serena Williams