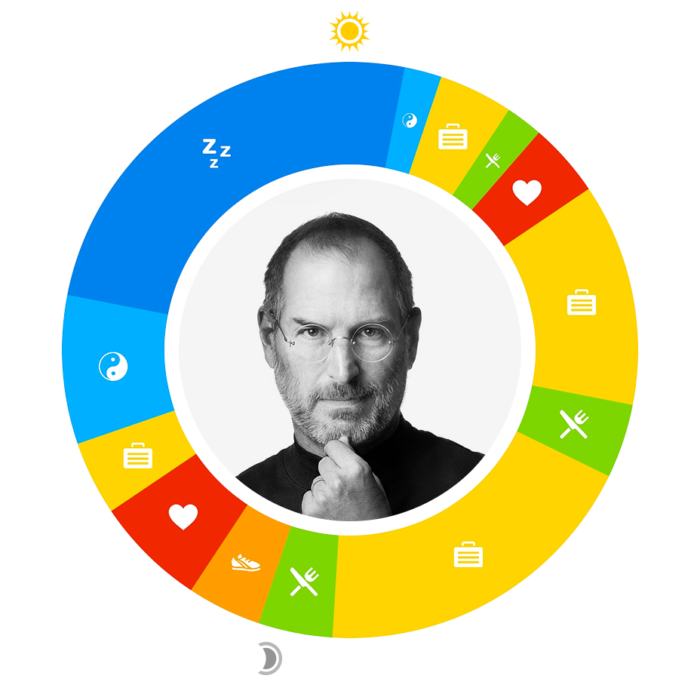 Day in the Life:
Steve Jobs

Steve Jobs lived an epic life and there is little wonder why so many people are curious how he spent his time. The FBI even compiled reports on his behavior, confirming he was an avid jogger, for instance. Friday’s upcoming Hollywood release of the biopic Steve Jobs will doubtless cast more light and spur the conversation.

It is important to remember when examining Steve Jobs and his lifestyle, may he rest in peace, that he passed away 20 years prior to the national average due to a devastating illness. Copy-and-pasting the workaholic patterns of his 20’s, fruitarian diet or notoriously mercurial demeanor, may simply be a mistake.

Nevertheless, there is little question we can learn from the person who brought the device two-thirds of us will be reading this on.

“I’m a good morning person. I like it early in the morning. I wake up six-ish.”

Steve put on the same outfit every day – an Issey Miyaki black mock turtleneck and blue jeans, so he didn’t have to “waste time” picking what to wear every morning.

“I have a pretty sophisticated setup; whether I’m at Apple or at Pixar or at my home… wherever I am, my complete world shows up, all my files. Everything… I put in a T1 to my house… so my office is at home too. And when I’m not in meetings, my work is fundamentally on email. So I’ll work a little before the kids get up.”

7:30 am: Breakfast with Family

“We’ll all have a little food and finish up some homework and see them off to school.”

Preferred snacks included whole and dried fruits, vegetables, and Odwalla juices “with the screw-on caps”. Many of the family’s fruits and veggies came from a home garden.

9 am: Arrive at Office

“If I’m lucky I’ll stay at home and work for an hour because I can get a lot done, but oftentimes I’ll have to come in. I usually get here about 8 or 9, having worked about an hour or half or two at home.”

“What we do every Monday is we review the whole business. We look at what we sold the week before. We look at every single product under development, products we’re having trouble with, products where the demand is larger than we can make. All the stuff in development, we review. And we do it every single week. I put out an agenda — 80% is the same as it was the last week, and we just walk down it every single week. We don’t have a lot of process at Apple, but that’s one of the few things we do just to all stay on the same page.”

Monday’s “marathon meetings” were reserved for the top ten executives at Apple. Wednesdays, Steve would meet with the marketing team.

Steve considered himself fruitarian, a subset of veganism, and would occasionally eat only one or two foods, like apples or carrots, for weeks at a time. His obsession with food was profound and began in his teens. It also came to identify the company he would create, as detailed by Isaacson:

“I was on one of my fruitarian diets” Steve Jobs recalled. “I had just comeback from the apple farm. It sounded fun, spirited, and not intimidating. Apple took the edge off the word ‘computer’, plus it would get us ahead of Atari in the phone book.” He told Wozniak if a better name did not hit them by the next afternoon, they would just stick with apple and they did.

After his cancer diagnosis, Steve was encouraged by family and physicians to consume more protein, including from animal sources. He developed an affinity for sushi including fatty tuna, salmon and yellowtail, and ate eggs as well. In his later life, Steve would most accurately be considered a pescatarian.

He was also a regular at the Fraiche yoghurt cafe in Palo Alto, and the local Whole Foods where he would go pick up whole wheat bread and vegetables.

“I’ll visit the Industrial Design’s lab in the afternoon, where Jony Ive and his team of designers work on prototypes of future hardware products. If they’re working on a new iPhone I might grab a stool and start playing with different models and feeling them in my hands.”

Product review sessions and related discussions took up most of Steve’s workday. He established himself as his Apple’s ultimate end user, and trusted his own intuition on improvements for new products.

“All these customers email me all these complaints and questions, which I actually have grown to like. It’s like having a thermometer on practically any issue. If somebody doesn’t flush a toilet around here, I get an email from Kansas about it. Sometimes I can get about 100 or more of those a day from people I will never meet. But I zing ’em around, and it’s good to keep us all in touch.”

Steve made his email address public while CEO and averaged over 100 email responses and 10 phone calls a day between Pixar and Apple. Other events in the afternoon might include rehearsals for upcoming keynote presentations.

Notably, Steve was a big fan of walking meetings. He felt they could help unite outlook and perspective.

Dinner is pasta with raw tomatoes, fresh raw corn from the garden, steamed cauliflower and a salad of raw shredded carrots. While Steve, his wife Laurene and his daughters eat, their six-year-old son picks lemon verbena and other herbs in the garden for after-dinner tea. His reward is a tickle and being tucked into bed by Dad later at night.

Steve’s sister recalls meals would often consist of “just one vegetable. Lots of that one vegetable. But one. Broccoli. In season. Simply prepared. With just the right, recently snipped, herb.”

Steve never drank alcohol besides the occasional glass of wine.

Grabbing a couple bottles of mineral water (usually Smart Water) from the fridge, the two would take off for a stroll around Palo Alto.

Favorite artists ranged from Bob Dylan to Bach. Music helped to re-center Steve emotionally and spiritually. Cellist Yo Yo Ma once played in his living room, and Steve called the performance “the best argument I’ve ever heard for the existence of God.”

Steve practiced Zen Buddhism and always carried a copy of Autobiography of a Yogi with him.

Steve Jobs summarized his workday best during a direct Q&A with All Things Digital in 2010:

What I do all day is meet with teams of people and work on ideas and new problems to come up with new products.

Especially during his later years, he was known to shirk the celebrity circuit and opt for a more simple life. “What’s astonishing is how normal a family life it is. Steve just never went out socially. He was home every evening”, reports Isaacson. Jobs himself said: “I have a very simple life. I have my family and I have Apple and Pixar. And I don’t do much else.”

Perhaps Steve’s ethos was best captured in his own words while eulogizing Sony founder and grandfather of consumer-electronics Akio Morita, “He expressed his love for the human species in every product he made.”

Without his efforts to connect us all through animation and technology, perhaps, we may not have had the technological developments and human connections that we have today. His life and accomplishments were astonishing, and at the end of that day, he emphasized the importance of maintaining real-life human connections beyond the virtual ones. These connections, even if they are virtual for the time being, can get us through several challenges. As an example, for facing the most tumultuous challenges in life, Steve Jobs profoundly confirmed “Sometimes life will hit you in the head with a brick. Don’t lose faith.”

With respect to Steve Jobs, his family, and the tremendous legacy he created.