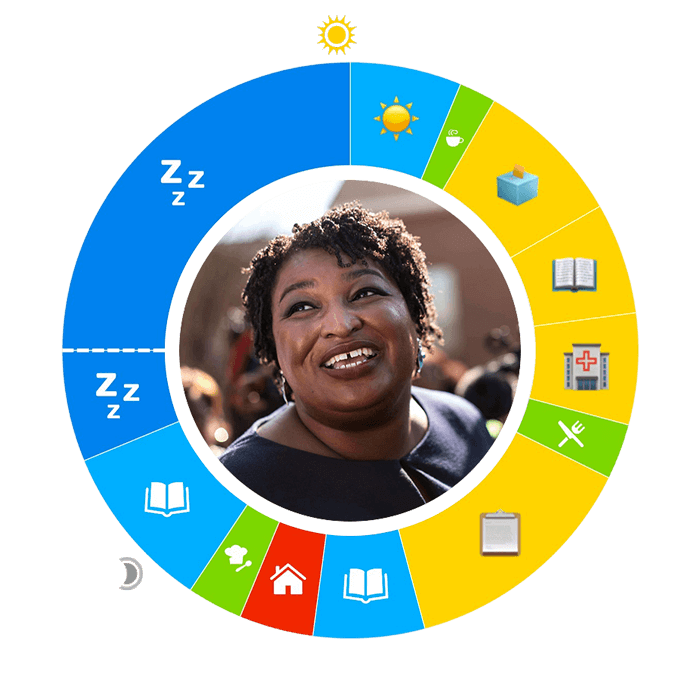 Day in the Life:
Stacey Abrams

On January 20, 2021, President Joe Biden and Vice President Kamala Harris were sworn in as the 46th President and Vice President of the United States of America. For many across the country, this inauguration was a sigh of relief. This day marked a time in which many groups within this country finally feel empowered to not only see a President that is able to listen to and respect our demands, but also see our very first female South Asian-African American Vice President. For an Arab-American woman like myself, it is inspiring to witness the first woman become Vice President, and important to know that our leaders will do their best to help unite us.

This milestone for our country can be attributed to all of the work that was put in to lessen voter suppression to give underrepresented groups a chance to showcase their voice. However, this type of win didn’t happen by chance. Rather, it occurred due to hard work and perseverance in a seemingly impossible task.

Stacey Abrams, an American politician, lawyer, voting rights activist and author, is accredited for this large success, with all of the hard work she has put in over the past decade to aid the country from voter suppression tactics. She believes that change, such as this, occurs when we get organized and persist towards a collective goal (Nielsen, 2019).

Young, but Full of Dreams

Stacey Yvone Abrams was born on December 9th, 1973 in Gulfport, Mississippi. Abrams went on to attend Avondale High School and graduated as valedictorian. Determined from the start, she worked for a congressional campaign at the young age of 17 during her high school years. She then earned her Bachelor of Arts in Interdisciplinary Studies from Spelman College. Abrams went on to complete her Master of Public Affairs from the University of Texas at Austin and later earned her law degree from Yale Law School. After graduating from law school, she went on to work as a tax attorney in Atlanta with a special focus on health care and public finance. Her political career officially began in 2002, when she became Deputy City Attorney for the City of Atlanta (Nielsen, 2019). 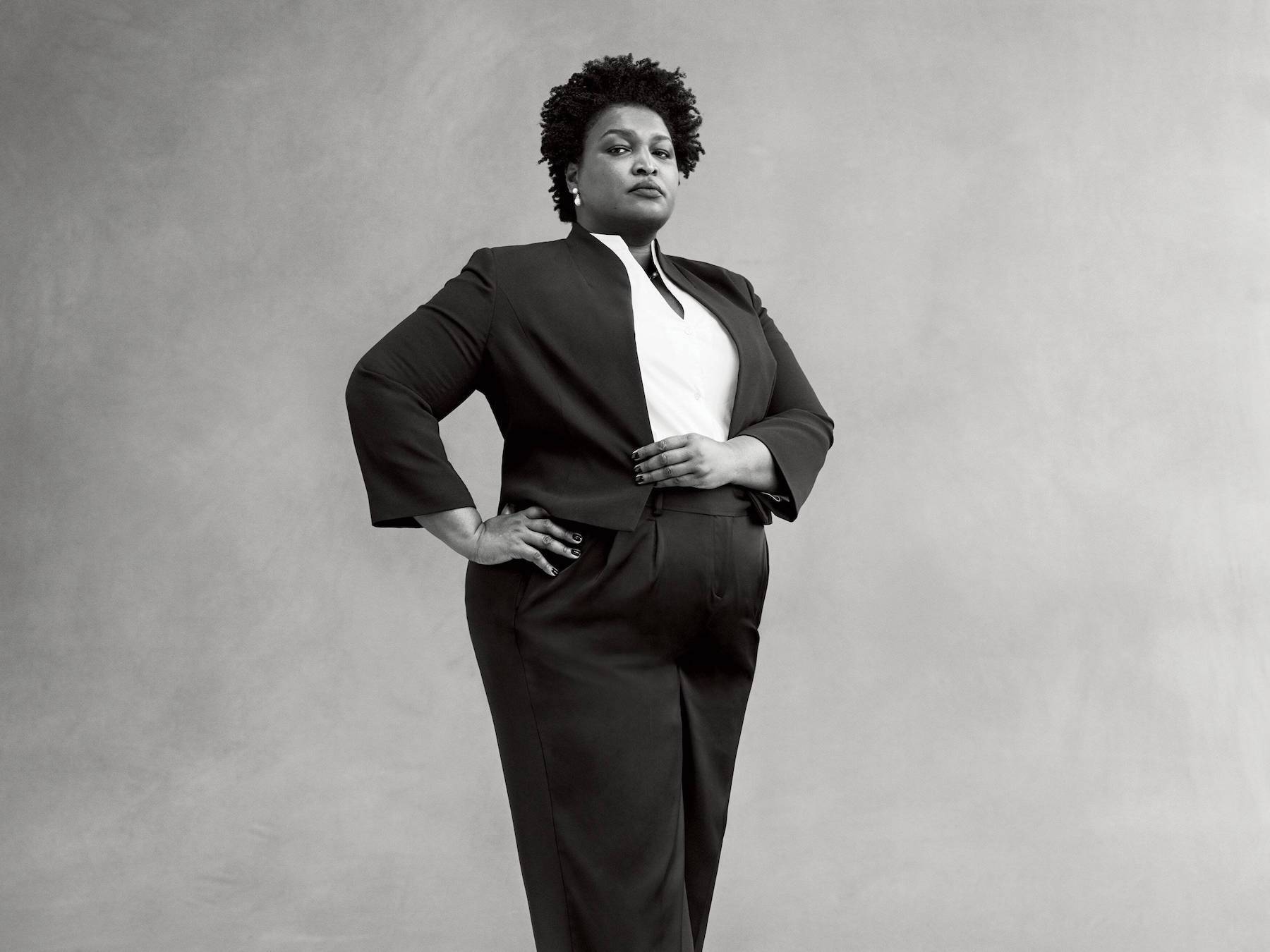 Stacey Abrams in a black and white portrait. Photo by Ethan James Green in September 2019 for Vogue.

Abrams served in the Georgia House of Representatives from 2007 to 2017. Additionally, she was the Democratic Party’s nominee in the 2018 Georgia gubernatorial election, making her the first African-American female major party gubernatorial nominee in the US. After her loss in this election, she made an extra point to address the downfalls of voter suppression, accusing this to be the main cause for her loss. Through this loss she created Fair Fight Action, a voting rights nonprofit organization that sued the Secretary of State and the state election board in federal court for voter suppression–this lawsuit is still ongoing. The mission behind Fair Fight Action is to “promote fair elections in Georgia and around the country, encourage voter participation in elections, and educate voters about elections and their voting rights” (Darrisaw & Vincenty, 2020).

By creating this non-profit, Abrams helped many young individuals feel as though they can go out and vote. Fair Fight Action kicked off in 2018, but she had actually been working on this initiative since 2014, in her founded New Georgia Project. Abrams states similarly that the “New Georgia Project is part of a consortium of organizations that have been working hard to register voters of color and voters who are unlikely voters.” This ongoing campaign is a deep passion of hers, and one that she will continue to work towards (Darrisaw & Vincenty, 2020).

Additionally, Abrams played a remarkable role in Joe Biden and Kamala Harris’s win in the State of Georgia. Georgia becoming a ‘blue state’ has not happened since the election in 1992, speaking volumes to her work in encouraging many black communities to use their voice. She was credited to have helped generate 800,000 new voter registrations in the State of Georgia, which is a phenomenal achievement (Darrisaw & Vincenty, 2020). 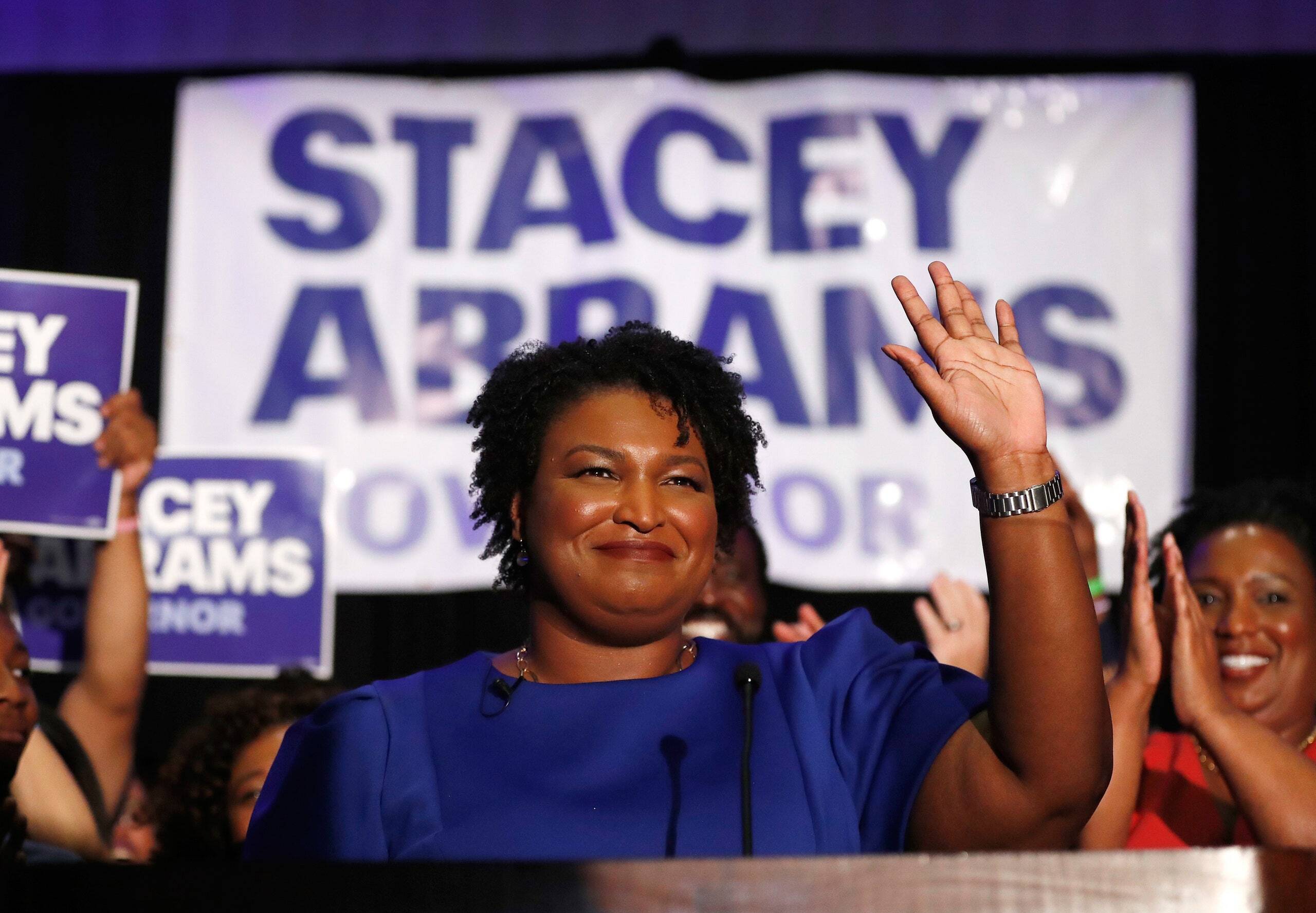 Stacey Abrams speaks to her supporters in 2018 as Democratic nominee for the Governor of Georgia. Photo by John Bazemore / AP. Source: The New Yorker.

An Issue to Conquer: Being Denied the Right to Vote

A problem that many face across the country happened to Stacey Abrams not too many years ago. Abrams herself was put in a position of being denied to cast her vote in 2018, due to an inconsistency saying that she already received an absentee ballot. Though Abrams understood the logistics of these procedures and was able to fight for her right to vote, she details that many are not able to do the same for themselves. This creates a wide gap of people that are unable to place their vote, even when holding the intention to do so.

Abrams details the “toolbox for effective disenfranchisement,” which purposefully disqualifies many voters from placing their right to vote due to small inconsistencies between their registration card and state ID. Some examples could be seen as using a hyphen in the state ID but not on the registration card, which would ultimately eliminate you from voting (Darrisaw & Vincenty, 2020).

Speaking Up About Voter Mistrust

Aside from this, Abrams speaks up on the issues that occur with the history of mistrust in the voting system, due to consistent voter suppression. This mistrust has created so many obstacles for individuals of certain geographical locations, jobs and ages to vote. Abrams distinguishes between someone saying, “I don’t want to vote” versus someone saying, “I don’t want my voice heard.” The matter of it is, as explained by Abrams, is that it’s typically the latter that citizens are expressing their frustration over (Jones, 2020).

She continues to explain that “for many others there is a feeling that their vote will not change their lives because of a distrust of the voting system or a feeling that those in power are indifferent to them and their communities.” This mistrust in the system is one that runs long and deep, and it will take time to undo all of its effects. The steps that Stacey Abrams and other individuals are taking right now are moving us forward to become a more trustworthy nation, particularly with the black voters of this country (Jones, 2020). 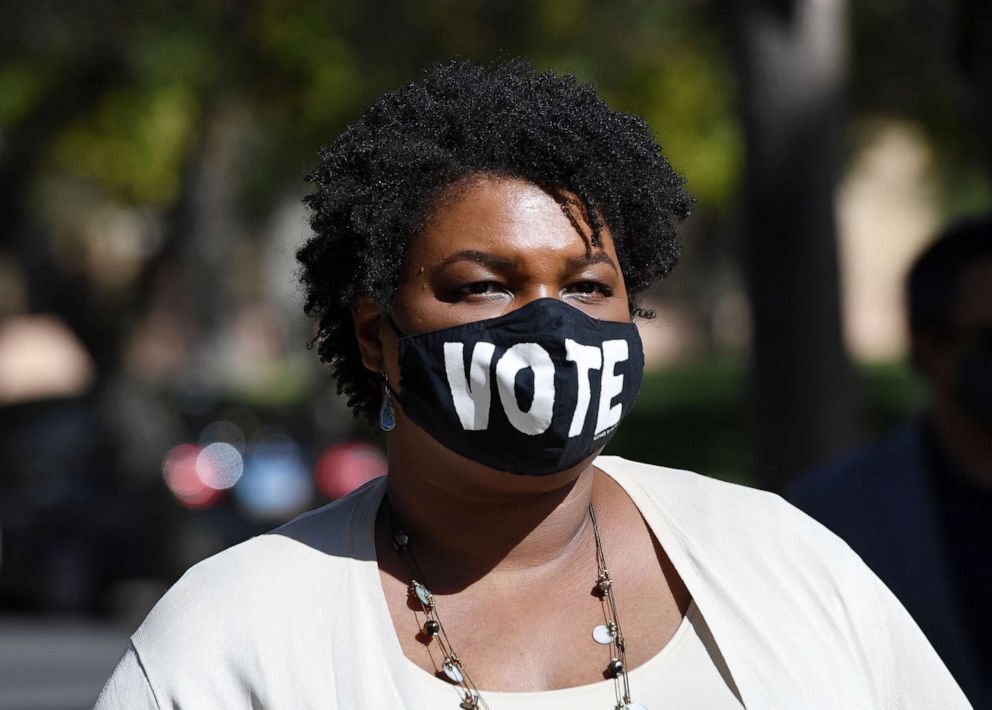 Stacey Abrams wears a mask with the word “Vote” on it. Photo by Ethan Miller for Getty Images. Source: ABC News.

Stacey Abrams has used an Excel spreadsheet to track her life goals since she was 18. She says that one of the keys to her success has been to map out her life goals this way so she can measure how well she’s tracking toward them. Specifically, she states, “I like to say that until you write down how you plan to get there, it’s just a wish. It’s a dream. But when you actually lay out the steps and you think about what it takes to make something real, that makes it possible.” Abrams continues to express that when she explicitly plans out her goals, it’s a turning point for her to concretize those goals and to detail how she intends on achieving them (Connley, 2020).

This inspirational way of living is a real example of how the motto “I think, therefore I am” can actually help individuals reach their goals through intention and framing their minds towards their goals (Connley, 2020).

Stacey Abrams’ Passions of All Shapes and Sizes

Amid all of her hard work to improve the lives of thousands of individuals across the country, Stacey Abrams holds a secret passion for writing novels. To be more specific, Abrams has a special side hobby of writing romance novels in her free time. She goes under the name of Selena Montgomery and has been publishing books since the early 2000s. In addition to these romance novels, Abrams also published many political nonfiction books as well in 2019 and 2020. She claims to have been an avid writer since her younger years (Nielsen, 2019).

Abrams’ parents are preachers. From a young age, they taught her and her siblings three special mantras: Go to school, go to church, and take care of each other. Abrams mentions that these mantras helped eventually lead her to want to help others on a wide scale: “[My parents’] commitment to assuring that we served people other than ourselves ran pretty deep.” Moreover, she continues to say, “We may have found ourselves volunteering at a homeless shelter or working at Vacation Bible School to teach people to read. Our privilege was that we had two parents who loved us, and that privilege meant that we had an obligation to serve.” This way of life reinforced in her from her parents instilled and furthered her passion for helping others, a large push in many of her achievements (Jones, 2020). 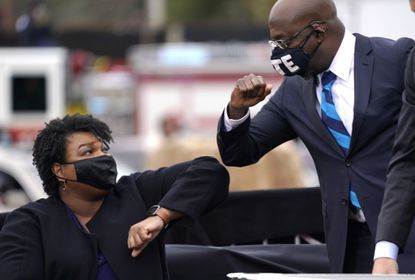 Connley, C. (2020, March 24). Stacey Abrams has used an excel spreadsheet to track her life goals since she was 18-why it’s been crucial to her success. CNBC.
www.cnbc.com/2019/11/14/why-stacey-abrams-uses-an-excel-spreadsheet-to-track-her-life-goals.html.