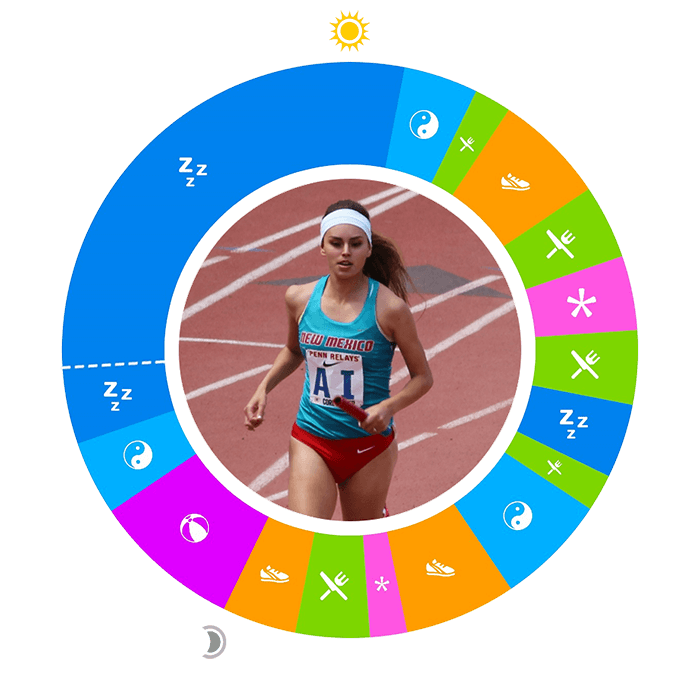 Day in the Life:
Samantha Silva

Samantha Silva helped Harvard reach the NCAA Cross Country Championships in 2012 and went on to finish her college career at the University of New Mexico. While at New Mexico, Silva developed into one of the nation’s top collegiate middle-distance runners. She earned All-American honors in cross country in 2013 after placing 12th at the NCAA Championships, and captured her second All-American honors with a sixth-place finish in the mile at the 2015 NCAA Indoor Track & Field Championships in March.

She is the New Mexico and Mountain West record holder in the mile, and owns the UNM record in the 800-meter run indoors and ranks third all-time at UNM in the 1500. She is also part of the school-record distance medley relay team. Her personal bests are 4 minutes, 35.44 seconds in the mile, 2:08.86 in the 800 and 4:14.93 in the 1500. Today, she’s competing for a spot on the 2016 US Olympic Team, running as a professional for Nike and continues to break records. Sammy discusses with Owaves how she plans her days for peak performance.

What is the most important part of your daily routine?

My run is the most important part of my daily routine. I try to get it done in the morning so that I have time to cross train later in the day. I’m not a morning person, so I usually have to down a cup of coffee before my eyes completely open and I’m out the door. Almost every other part of my day is geared towards properly recovering from my run and preparing for the next one.

What about your “O” do you think is unique or special?

The act of running is often thought of as a singular activity but within my life its presence is far more ubiquitous. I think it’s a special part of my life because it’s a lifestyle I’ve grown into. It began as a simple exercise I enjoyed, but now serves as the crux of my daily activities. High school track was my foray into running and since then, it has delineated the path that my life has taken. I never thought this would be the case, but I also never thought I would find it so fulfilling.

What is the best piece of health advice you’ve ever received?

I’ve received plenty of useful advice the past few years but there is one line that stood out to me in a book I was reading about a year ago:

“There never was a moment, and never will be, when we are without the power to alter our destiny” – Steven Pressfield, The War of Art.

I found this to be particularly poignant at that time in my life and have had it written on a post-it note in my room ever since. It serves as a reminder that it is never too late to start living my life in a way that will set me up for accomplishing my biggest goals, and changing one’s destiny starts with changing one day at time. I find this empowering because daily life can often make one feel tethered to a certain path, but the individual always has the capacity to alter what is within their control. It can also be applied to any healthy practice that one wants to pursue. One of my old coaches would always say something to that effect, “Control what you can control”, as we were approaching an important race in our season. Why leave anything up to chance? That is why I wake up every morning and decide to do everything within my power that will help me become a better athlete and a better person.

Describe your sleep ritual. Do you do anything special to prepare?

On nights that I have trouble falling asleep it is usually due to thinking about things that need to be done the following day. I mollify those thoughts by writing a to-do list in my planner for the following day. I not only have more peace of mind as I’m trying to fall asleep but also feel a lovely sense of achievement as I check off every task the next day.

Tell us about a time you were stuck in an unhealthy cycle and how you got out of it. What was the main inspiration for positive change?

I’ve gone through a myriad of unhealthy cycles since I started running in high school. Getting out of these ruts seemed difficult at the time, but in retrospect I realize that the unhealthy cycle stemmed from life stress. All it took was a change in mindset to reset my daily habits. My inspiration would be an upcoming season or the goal of winning a race. Having a concrete objective is an impetus for a healthier habit. I would identify a realistic goal for the season and then draft a training plan which would foster achieving that goal. Following the training plan would get easier every day as my mind and body grew comfortable with the routine. It also doesn’t hurt to be surrounded by people who support your endeavors and hold you accountable.

If you could give one piece of health advice to your future kid(s), what would it be?

Being “healthy” encompasses more areas of your life than you may think. It’s important to remember that mental and emotional health plays just as large of a role as eating healthy and exercising. Part of creating comprehensive health is learning how to properly handle the challenges we face in life. Keeping a positive attitude in light of daily stressors can make all the difference.

Ryan Seacrest – he seems to do it all, yet still sounds so chipper every morning on his radio show!

Running.
Sammy Silva is an Olympic Candidate, two-time NCAA All-American athlete and studied law as an undergraduate at Harvard. For more inspiration from Sammy, follow her on Instagram and Twitter.