Day in the Life:
Richard Branson

For the last 50 years, Richard Branson, Kt, has been bucking the status quo and creating awesome. With nearly 400 companies under his Virgin branded umbrella, the man is worth just south of $5B and continues to stand out among a growing pack of entrepreneurs.

Writing to us from hammocks in Necker Island and tweeting from his private planes, it’s easy to understand why millions of aspiring entrepreneurs across the globe have Richard Branson in mind when chasing what they’re chasing… It’s a vision of life conquered.

Notably, in a world where some billionaires talk about their climb to success as a dreary, arduous nightmare – Elon Musk famously quotes, “it’s like chewing glass and staring into a deep abyss” – Branson shines a smile and says it’s fun. Work-life balance (or integration as the millennials like to say) is not a quip, or a “nice-to-have”. It’s how he defines success.

A brief glimpse into your average day on the 74-acre Virgin Island:

Richard Branson is an outspoken proponent of the benefits of waking up early. Curtains are drawn overnight so sunrise can prop his eyelids. Day starts with an iPad in hand, in bed, answering email.

“Founding a business comes with a lot of responsibility, and one of the most important things I can be is accessible. Getting up and at it early gives me time to get on top of things, and chart my day effectively.”

Operating out of 50 countries across the globe, it is essential for Richard to be on top of the world’s news. Bloomberg Business TV and other favorite resources keep him abreast starting early AM.
Richard Branson
Exercise takes place in the form of kite surfing, tennis or a simple hike around the island. Occasionally he’ll drop in for a swim with the eagle rays and giant sea turtles. Kite surfing is Richard’s favorite sport, and if conditions are right he’ll make sure he gets at least 15 minutes worth in the AM. “It’s great for the whole body and mind, and it’s fun… The best way to stay fit is to keep playing.”

8-9AM – BREAKFAST: A Social Occasion

Up to forty guests visit from all over the world and there are approximately 70 staff on the island. For Richard and his family, meals are a social occasion enjoyed on long tables outdoors. Branson advises entrepreneurs to “keep a sofa in the kitchen” as a way to keep mealtime a family affair: 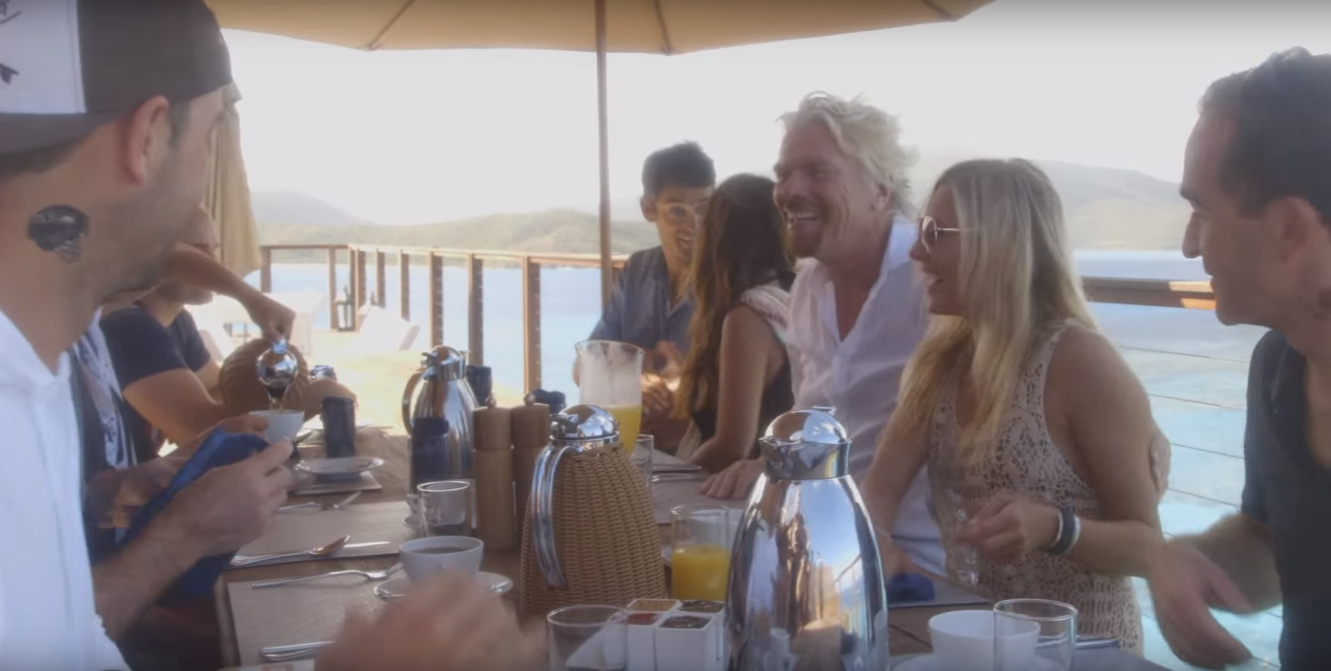 “I haven’t sat at a desk since I was a teenager.”

After breakfast, phone calls are usually fielded from a hot tub overlooking the Caribbean Sea. He took a call from Nelson Mandela on one such occasion, who urged him to take an overnight flight to South Africa. A major health club chain facing bankruptcy risked losing 5,000 jobs, and they needed his help.

Richard is a strong proponent of flexible work lifestyles. This includes being able to work from home or remotely. He believes time away from the office allows employees to focus less on the day-to-day minutiae of running a business and more on the overall picture.

A strong example he provides is the founding of Virgin Galactic, the inspiration for which came while swaying on a hammock at Necker staring up at the stars. “I want to go to space… Only 500 people have ever been to space, and I think there’s many more who want to go. The more people who go to space, the more who will see our world without countries or borders. That will change the way we think.”

Most of Richard’s time is now devoted to his philanthropic initiatives including The Elders and the Carbon War Room. Dignitaries including Former President Jimmy Carter, Archbishop Desmond Tutu and Former Secretary-General of the United Nations Kofi Annan visit the island periodically for meetings related to human rights, preservation of species and climate change.

Richard publicly gave up red meat last summer, citing its harmful impact on the environment. Keen to also prevent heart disease, he loads up on fruits, veggies and opts for sushi instead. His guilty treat is whole nut chocolate.

Sushi served on Necker is no small occasion. Staff haul in fresh tuna and swordfish from Miami three times a week. Maki rolls and sashimi are spread on a kayak, served in the pool. 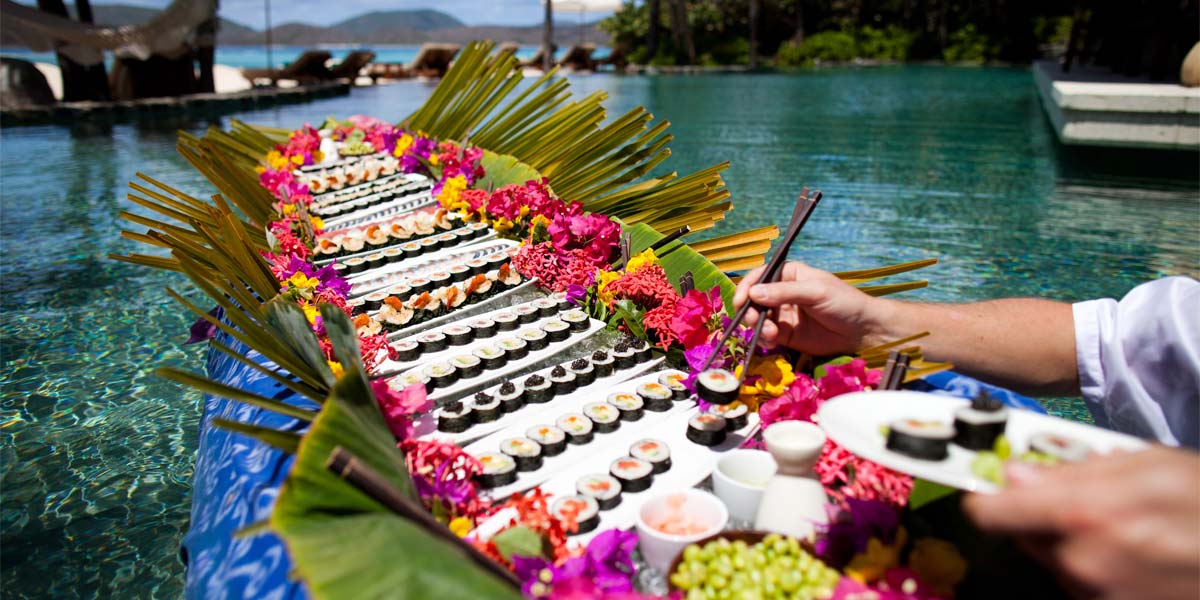 While the rest of his days are action-packed spent traveling, Branson cherishes quality downtime on the island. He married his second wife Joan here in 1989, and their two children, Holly and Sam visit frequently.

Chess with Sam is a favorite down-time activity: 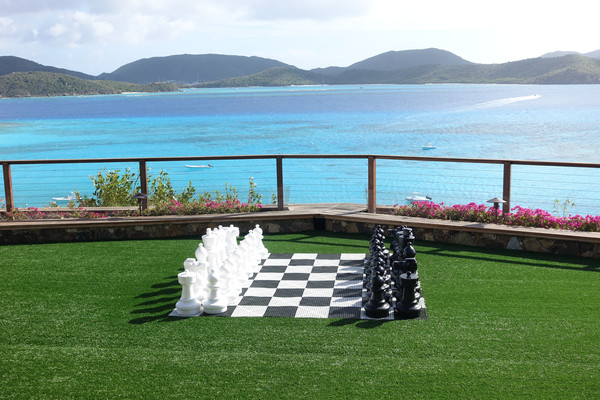 7PM – DINNER: Around the World

Branson’s Michelin-trained culinary staff preps various styles of dinner depending on guest tastes. “Moroccan, Caribbean, French, Italian, all styles…”, according to the head chef. Fresh seafood and lobster are among the most common entrees.

In Richard’s words, most guests on the island are there for one reason – to party!!

While his rowdiest days are behind him, Richard will occasionally replace tea and biscuits and cranberry soda with Necker Island Champagne. Guests sip island favorites including passion fruit martinis and tamarind mojitos.

Theme parties (Disco, Up, Up and Away) are typical. Live Caribbean reggae bands keep the beat, while folks dance the night away. If Branson gets to DJ, you might hear Peter Gabriel or the Rolling Stones.

His kids join the fun, and when it’s getting late, Joan pulls him to sleep. 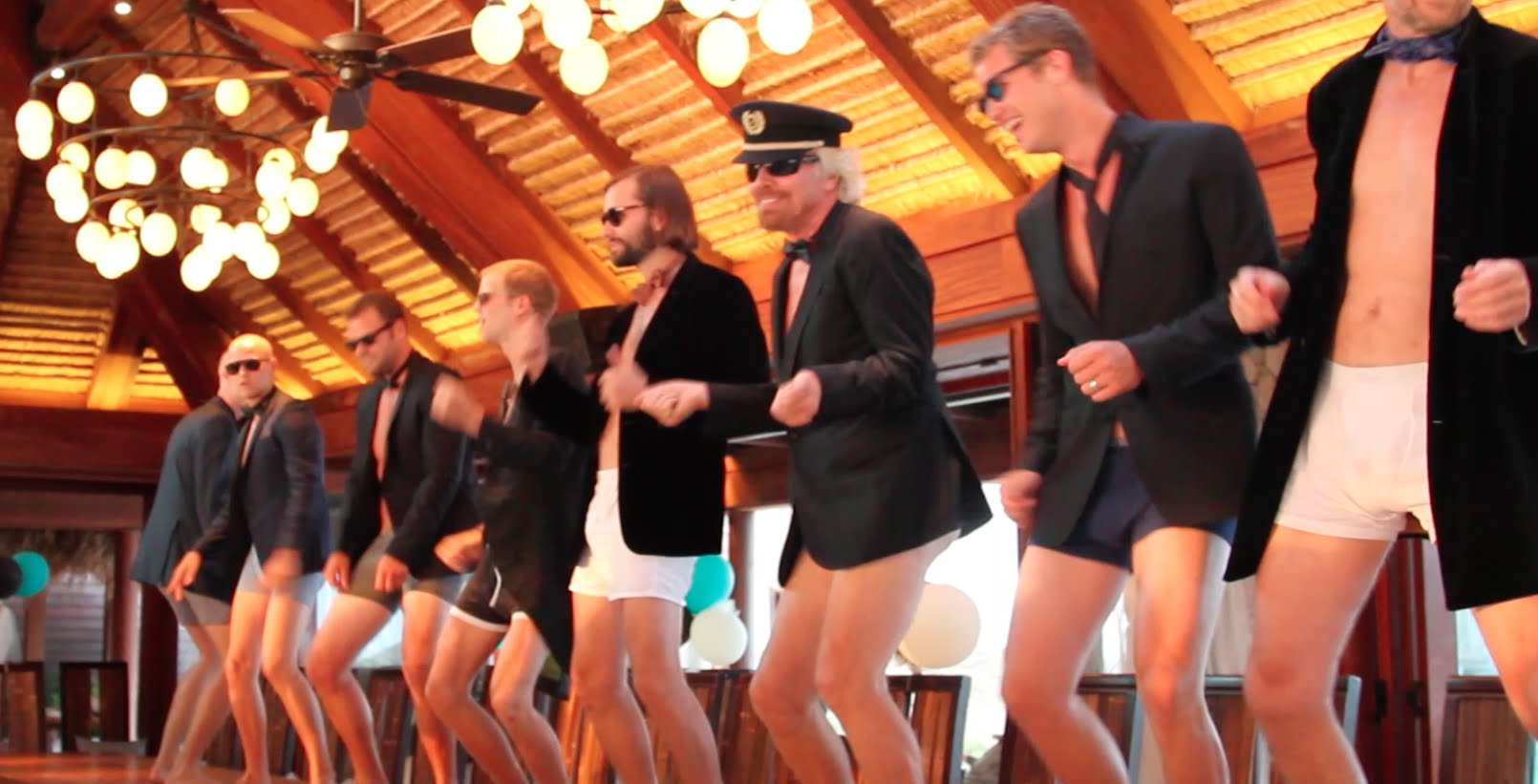