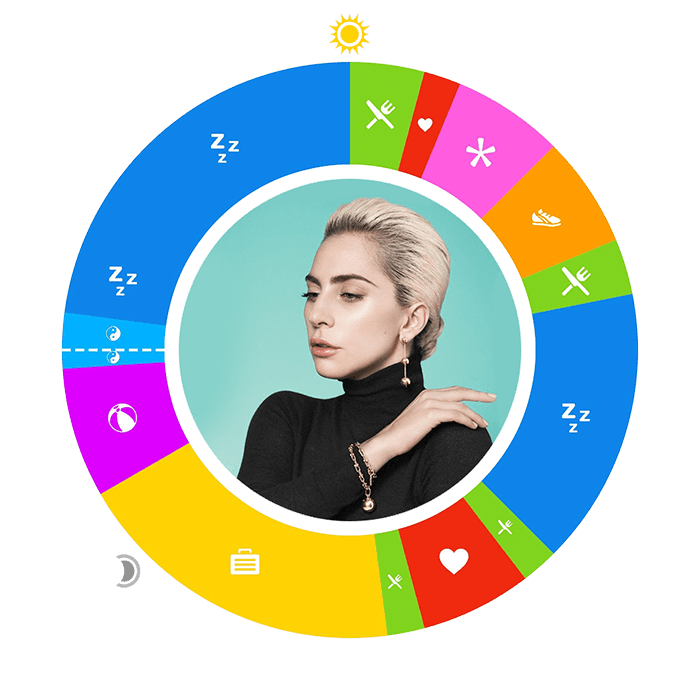 Day in the Life:
Lady Gaga

Twelve-time Grammy winner Lady Gaga headlined Coachella Music Festival in 2017, making her the first female to do so since Bjork in 2007. The singer, songwriter and actress has sold over 30 million albums and 150 million singles globally, making her one of the best-selling musicians of all time. With her fifth studio album Joanne released in 2016, she became the first woman to have four US number one albums in the 2010s. In February 2017, Gaga headlined the Super Bowl LI halftime show which had a total audience of over 150 million across various platforms worldwide, making it the most viewed musical event in history.

Since releasing her newest album Joanne in late 2016, Lady Gaga has opened up more about her family, specifically her Aunt Joanne (the album’s namesake). While producing the album, Gaga recalls it was her most touching album yet: “There was a lot of crying, a lot of pain, and a lot of learning about myself.”

Gaga has come a long way to where she is today, and when you ask her what has constantly motivated her, she will say it’s her family. She is especially close to her father. When she was just starting out, she remembers, “Playing music for my father for the first time was very powerful… he was very emotional.”

“The reason I am here at all is because of my family and their encouragement of me to be a musician and to work hard.”

When it comes to health and fitness, Lady Gaga has maintained a consistent regimen that keeps her focused and on track. As far as fitness goes, she loves to practice Bikram Yoga with her long-time NYC trainer, Tricia Donegan. It keeps her balanced and heals her “inside and out.” Additionally, she works out five days a week, at least twenty-five minutes a day, to keep her physique.

Gaga has a few things she loves to do outside of performing for her beloved fans and creating new music in the studio. Off stage, Gaga spends most of her time creating and visualizing what her next performance will look like.

Gaga has made it a habit of waking up every morning and spending 5 minutes thinking compassionate thoughts about herself. She proclaims, “Love who you are, you are all that you got.” This is incredibly powerful for Gaga, who spends most of her life in the shining light of others and has to constantly be reminded of the public’s opinions.

Additionally, her fans have supported her in her transformations throughout the years. Asked what she is currently reading, she mentions her fans’ stories: “There are all kinds of stories, all kinds of backgrounds, all kinds of journeys.”

When asked what one of her favorite movies is, Gaga eagerly mentions Rocky IV. Whenever she has down time, she’ll watch the movie to remind herself of her journey to the top. Her French bulldog, Miss Asia Kinney, will occasionally make appearances with her in matching outfits. Their biggest appearance together to date is on the front cover of Harper’s Bazaar in 2014.

Before Gaga goes on stage to perform in front of thousands, she’ll spend some time relaxing beneath pictures of Elton John, Jimmy Page, and John Lennon, among others. She loves to surround herself with the energy of her idols. In her dressing room, you will find a box of vinyls that she takes on the road with her, alongside gifts from her fans—amongst all, a plethora of unicorns.

Occasionally, Gaga will have her family or friends visit while she is on tour. She’ll spend some time with them before she gets ready to go on stage.

“I don’t feel alive unless I’m performing, and that’s just the way I was born.”