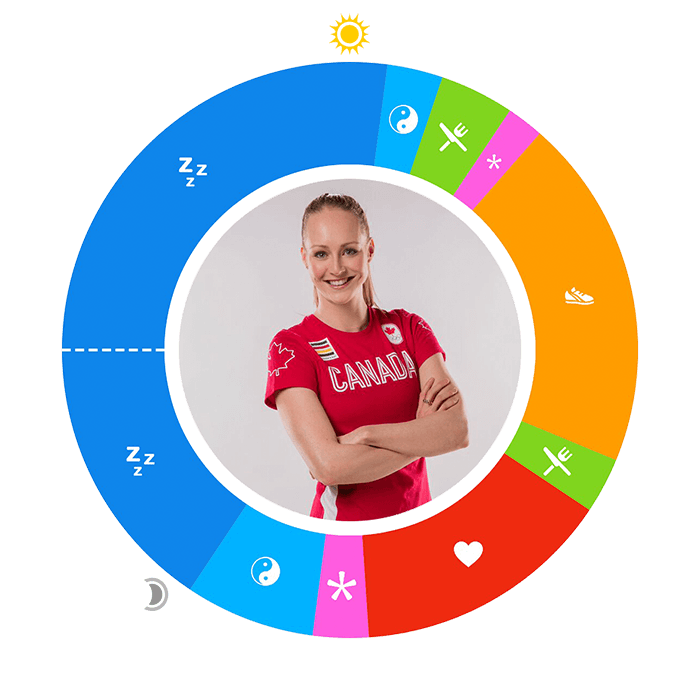 Day in the Life:
Karine Thomas

Karine Thomas is an Olympic athlete on the Canadian National Team and 3X Gold-Medalist at the Pan-Am Games. She placed fourth in the London 2012 Summer Games during the synchronized swimming team event and will be competing with Jacqueline Simoneau in the Rio duet event. The two took gold together in the 2015 Pan-Am Games and according to CBC, “They will go to Rio in August armed with a new routine called Heartbreak they say is revolutionary in synchronized swimming for its emphasis on emotion and artistic expression.”

The daughter of two water polo Canadian National Team members fell in love with synchronized swimming while watching the 2000 Sydney Olympics. Six years later, she left her hometown of Gatineau to join the Canadian Junior National Team at the 2006 FINA World Junior Championships in China, still her best memory so far in this sport.

Thomas then joined the national team in 2007 and made her debut at the FINA World Championships that year. She helped the team to fourth place finishes at the next two world championships. She was also a member of the team that won gold at the 2011 Pan Am Games. Thomas began competing in the duet competition shortly after the 2012 London Olympics.

Studying health sciences to possibly work in the pediatric area, Karine’s favorite part about the sport are the friendships it fosters with her teammates.

Favorite Exercise: Other than swimming, I love yoga and running.

Favorite Healthy Snack: Fresh fruit is my favourite snack! Or… anything with peanut butter.

Favorite Way to Center: 10 minutes of meditation every morning. Starts my day off right!

Favorite YouTube Video: Any “What I eat in a day” from vegan or plant-based YouTubers.

Personal Motto: Do it with passion or not at all!

What gets you out of bed every morning?

Knowing that I can have breakfast soon!

What is your #1 wellness habit?

What is the most important part of your daily routine?

For me, the most import part of my day is starting it off right. A small 10 minutes of meditation and a big breakfast is key.

What about your daily routine do you think is unique or special?

I train up to 8 hours a day for my sport. So I guess the amount of excercise I do is a little out of norm.

Whose “O” would you most love to see?

Michael Phelps – the greatest athlete and inspiration of all time.

What is your favorite part about living a healthy lifestyle?

The way it makes me feel, being happy and energized is everything.

What is the best piece of health advice you’ve ever received?

Recovery is just as important as training.

I like to decompress before bed, no phone, no iPad or computer.

Tell us about a time you were stuck in an unhealthy cycle and how you got out of it. What was the main inspiration for positive change?

At one point I was training full-time, working part-time and trying to maintain a social life. I had to make some real changes as I was totally burning myself out. I came back to what was important to me. Prioritizing is what’s important in the end!

If you could give one piece of health advice to your future kids, what would it be?

Listen to your body, it will tell you what it needs.

Karine Thomas is an Olympic Synchronized Swimmer, Canadian National Team Member and 3X Gold Medalist at the Pan-Am Games. For more inspiration from Karine, follow her on Instagram, Twitter and Snapchat “@karinethomas”.