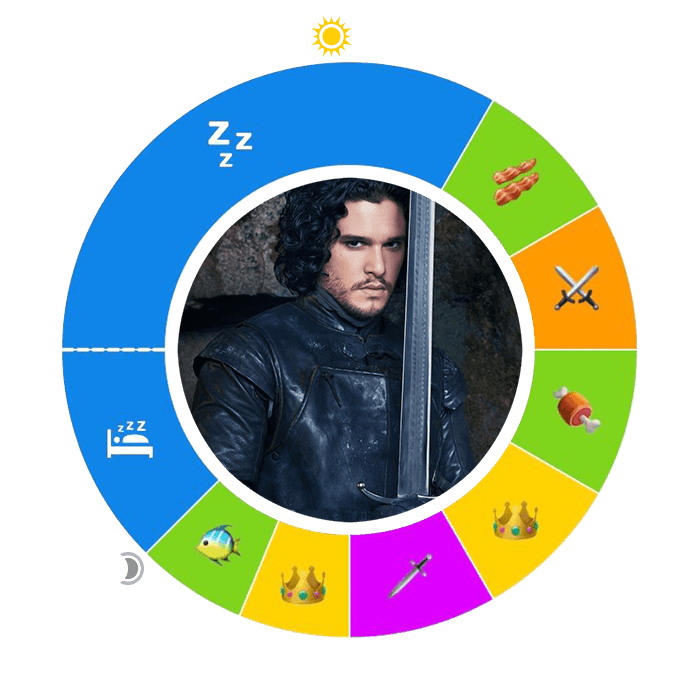 Day in the Life:
Jon Snow

Jon Snow, the so-called “Bastard Son”. Jon has come a long way since he left Winterfell to become a man in the Night’s Watch. After being shamed by his stepmother for being a bastard and never fully being a Stark, he decided to make a new name for himself and move to Castle Black. He has been through hell and back trying to find out his true self – he’s gone from being a soldier to becoming a Wildling, to becoming the next Lord Commander of the Night’s Watch, to even dying (thankfully brought back by Lady Melisandre) and then the King of the North. After giving up the title King of the North for the war, he became the Warden of the North. His true mission is trying to find allies to help protect the northern borders from the Night King. His allegiance lies with the “true” Queen, Daenerys Targaryen. All the in the meantime, Jon is living a very active life.

His love for the greater good sparks his eagerness to find allies and an army to defeat the Army of the Dead. The white walkers approaching the northern border has everyone running for the south or protecting what they can. As his love for Daenerys grows, he finds a lot of his duties changing. After pledging his loyalty that Daenerys as the Queen, his days seem to cycle between protecting the border and protecting his queen.

In the early mornings, Jon, like all good “Kings” eats a meal of eggs, pork sausage, and bread. A King needs to carb-load and intake protein before his next thing on his list of the day. In the morning, he receives notice from Sansa of any updates in Winterfell. His half siblings are overseeing the North while he is gone to look for more allies and dragon glass. After seeing the white walkers, and plenty of them, he tries to rid the image from his head. Of course, there is nothing like trying to briefly get rid of white walker thoughts like making love to Daenerys.

Next on Jon’s list is training. The horror of the white walkers and the Night King are soon to come. In order to defeat the army of the dead, Jon needs to be able to create a stealthy speed to puncture the walking dead with dragon glass and find a way to burn it alive. He practices a few hours at mid-morning while the sun is peeking. He trains with his trusted sword, Longclaw, against his friends.

After his training sessions, Jon eats lunch at the company of his allies such as Daenerys and Tyrion. At lunch, they discuss their next moves to fight this war. Trying to convince Cersei to join them seemed a little too easy, but they are trying to get as many people as possible. They know for the time being they have to get rid of the Army of the Dead, or the Seven Kingdoms will fall and no one would be able to rule it all.

For lunch, Jon eats a heaping of salted pork, duck and candied plums. He needs to recover from training with the boys and build up his strength for his next training session. Jon also needs food to get through the next few hours of his life – meetings.

As the top players of the war, they lead into a council meeting with fellow lords and advisors. Of course, Tyrion and Daenerys help with making big decisions. They need to talk strategies to try and figure out the front lines and if Daenerys will attack from the sky. She is trying to lead the people although having aerial techniques would put them in greater advantage over the Night King. Jon, however, strategizes leading the troops by foot.

Later in the day, Jon has another training session. He has tracked down dragon glass and will need to dig them up as he goes. Valyrian Steel, however, is their next best bet. One swipe with the sword will perish the white walkers. The way it keeps its form destroys the white walkers the fastest. However, the swords are scattered and Jon believes dragon glass will be their best bet. Picking apart dragon glass from the caves on Dragonstone will take all the effort they have. In the meantime, he makes sure there are enough swords, shields and other helpful weapons for everyone.

Cersei has to join the army as an ally to protect the seven kingdoms. However, it was a little too easy. Jon meets with Cersei to get her head in the game. His hatred towards her is put aside in the meantime. He knows she doesn’t fully trust any of them. She is a queen obsessed with her iron throne. She likes to do whatever she wants, making it difficult for Jon to trust her. Jon’s gameplan of how to attack the Army of the Dead and protect everyone within Westeros comes at a price. Cersei’s position on the throne doesn’t protect her from the White Walkers. But to Jon, the safety of the Seven Kingdoms is bigger than the original war for the throne.

At the end of the day, it’s time to unwind and try to take care of oneself. Jon eats dinner with his friends once again and his potential significant other. No one knows the worries of tomorrow he’s doing the best he can now. For dinner, Jon loves to have a balanced meal of fish, frey pie and wine. He talks with Tyrion and catches up on stories of their years apart from the first time they met. It’s been quite a journey.

After a long day of errands, training, and meetings, it is finally time for bed. After growing closer to Daenerys from the moment he got there and their encounter from the Night King, it was only a matter of time before they would find themselves in bed together. He loves spending time with her and it’s a good way for them to relieve some stress. Jon’s feelings are growing at a rapid rate as he learns more about the Mother of Dragons – his “Dany”. It’s a good thing he has someone to cuddle up to – Winter is Here.

●  Day in the Life: Steve Jobs