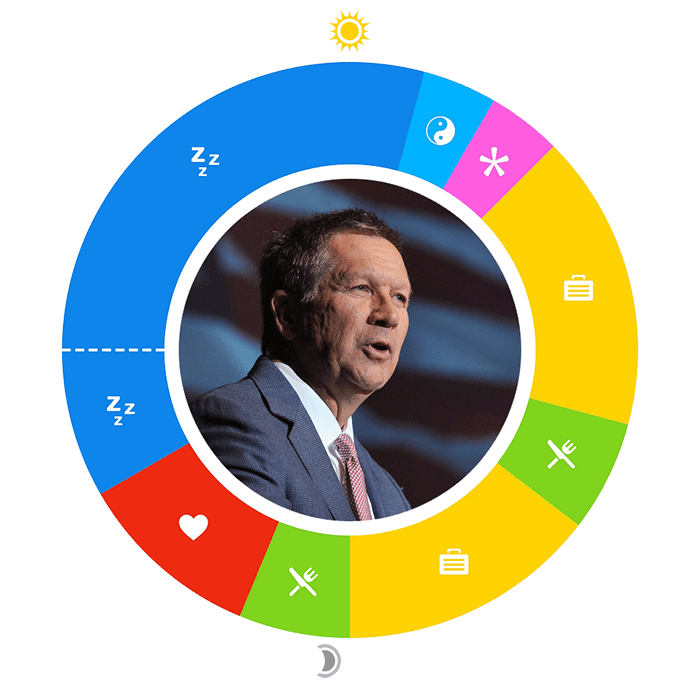 Day in the Life:
John Kasich

John Kasich isn’t afraid to take big shots, and perhaps that’s why he was the last one standing against Donald Trump in the Republican presidential race. As a college freshman at Ohio State University, John talked his way into the White House by convincing his university president to deliver U.S. President Richard Nixon a handwritten letter. Three weeks later, at 18 years of age, John was invited to a 20 minute visit at the Oval Office.

Growing up in a blue collar town outside of Pittsburgh, Kasich always felt “the presence of God”. He considered becoming a priest, and as an altar boy once scolded congregants for not singing with enough passion. While he focused less on religion during his college years, a tragic drunk-driving accident that took both his parents’ lives in 1987 veered him more strongly towards the church. He describes this experience as the pivotal moment in his life:

To say it was the most important event of my life is an understatement… I don’t feel my parents died in vain. It renewed my faith and I assessed life a lot differently than before.

Kasich begins each day with morning prayer. As he puts it:

I study (the Bible) every day… If I don’t – do you know what a tether-ball is? How it’s connected to this pole in the middle and it goes round and round? It centers me.

On the campaign trail, Kasich started team meetings by listening to gospel music and sharing hugs. In his biography, Every Other Monday, Kasich discusses the strength he draws from his Bible discussion group that meets for lunch twice a month.

When not listening to gospel music, apparently Kasich is a huge rock n’ roll fan… he once got thrown off the stage at a Grateful Dead concert.

Central to Kasich’s daily motivation is to provide a good example for his twin daughters, Emma and Reese. More accurately,

I like to think as they get older, they’re gonna realize that dad was a role model for the guy that at some point way down the road they would marry.

His wife, Karen, is an avid marathon runner who spends her time as First Lady of Ohio advocating for healthy living through nutrition and exercise. Her motivation stems from her family’s pervasive history of heart disease – her father was one of the first to receive a coronary bypass surgery in 1966 and her mother passed away five years ago from congestive heart failure.

As John puts it, “… from the very tips of my toes, to the top of my head, I just love my wife so much.” Although separated for most of the campaign trail as Karen took care of the kids and maintained the family home, they plan to resume a “very normal life” when the governor returns to Ohio.

Maybe his only Vice

Perhaps John’s most notable vice is his love for anything yummy. Even Trump weighed in on the ex-challenger’s eating habits, saying:

Seriously, did you ever see a guy eat like this? Every time you see him, he’s eating. He’s stuffing his face. I’ve never seen. The pizza. He ate a piece of pizza – I’m telling you it was 4 or 5 inches long by 4 or 5 inches – and he couldn’t get it in his mouth. And he’s pushing it in with the fork and he’s got 20 cameras around.

Kasich is blunt about his love for Italian food, telling theSkimm, “I guess it’s not good for us, but I don’t care.”

I think Kasich is enjoying the Bronx pic.twitter.com/WXOBhO84my