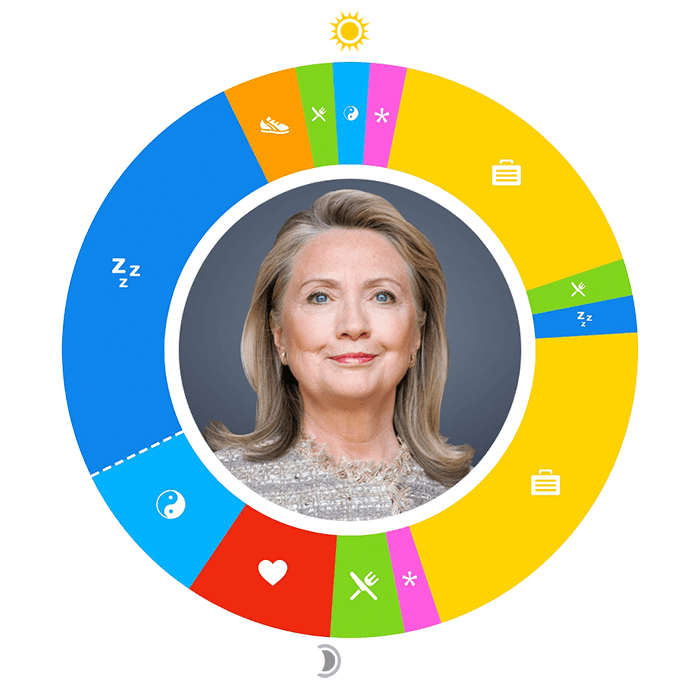 Day in the Life:
Hillary Clinton

Hillary Diane Rodham Clinton initially kept her last name when she got married, never wore make-up, hates doing her hair and categorized herself as a “compassionate misanthrope” in a letter to her friend in college. Dubbed “Owl Eyes” by her grade school classmates for her over-sized, thick-rimmed glasses, she went on to join political campaigns at the age of 13, get elected Chair of student council and voted “Most Likely to Succeed” in high school, and later chosen as class president at Wellesley and asked to give the first student commencement address. Hillary has always risen to the top, and as she put it at the end of her 2008 presidential election bid, led the way to 18 million cracks in the highest glass ceiling. 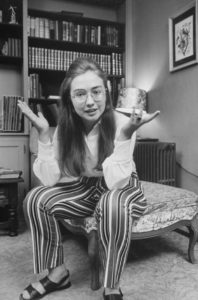 Whether or not she is successful in her 2016 presidential bid, Hillary has already
left quite the legacy:

While a passionate advocate for more accessible health care over the last two decades – she helped establish the first neonatal nursery at Arkansas Children’s Hospital in 1979 and laid the political groundwork for the Affordable Care Act while serving as First Lady – health scares for Bill and herself personally in 2004 and 2012 respectively, have led to increased attention on day-to-day wellness. The following is a portrait of an actual day in Hillary’s life during her four-year tenure as Secretary of State:

Flex in the AM

Hillary starts her day with gratitude and prayer. She was brought up a Methodist, and prays for “people whom I know by name, people who have gone through or are experiencing difficult times, illness, death, divorce, disappointment… I pray for the will of God to be known, so we can know it and to the best of our limited ability try to follow it and fulfill it.”

When in D.C., she exercises with a personal trainer three times a week at 6AM. On weekends spent at the family home in Westchester, New York, she meets one-on-one with a hatha yoga instructor. Favorite workouts involve swimming and water aerobics.

Clinton notably credited meditation and yoga for her endurance and resilience during the eleven hour Benghazi interrogation:

Hillary’s mother, Dorothy, taught her to visualize a carpenter’s level, and “always keep the bubble in the middle” as a method of finding equilibrium throughout life’s inevitable ups and downs.

After a half day’s of work, usually spent in meetings, events and briefings scheduled down to the five-minute level, Hillary will retreat to her Secretary’s office for one hour of lunch and office work.

After Bill’s diagnosis of heart disease, the former President famously went vegan with the help of healthcare luminaries Dean Ornish, M.D. from UC San Francisco and Mark Hyman, M.D. from Cleveland Clinic. This of course had a tremendous impact on Hillary and their daughter Chelsea’s diet as well. Hillary in fact fired White House chef Pierre Chambrin, who was serving butter-laden, high-fat French foods and hired low-fat, low-calorie diet expert Walter Scheib in 1994. The most frequent course subsequently served in the White House was fish and veggies, and the soy-based Boca Burgers became a regular part of the rotation.

After gaining weight during her first presidential campaign, Hillary adopted the habit of snacking on fresh jalapeños and carrying crushed red peppers and tabasco sauce in her purse. Not only does it help to stave the appetite, but also boosts immunity, as Hillary likes to quote. Weaknesses include Dove Bars and mocha cake.

Naps are Good For You

Like more and more enlightened leaders of our time, Hillary is not buying the prevailing B.S. that less sleep is good for you or a sign of strength. Like Arianna Huffington, she learned the hard way when doctors informed her the blood clot she suffered from in 2012 may have been related to her exhausting schedule as Secretary of State, while she logged almost 1 million miles in travel and visited 112 different countries (both set records for her position). The forced release of her private emails have revealed her high degree of interest in the subject of sleep and health, requesting her personal trainer to research articles on the topic.

With constantly changing time zones, Hillary was so sleep-deprived that she developed the ability to take 10 minute naps in a moment’s notice while on the road, which she describes in good humor with Jimmy Fallon:

It’s interesting to note that both Bill and Hillary suffer from lifestyle-related diseases – Bill’s heart disease and angina were attributed by his doctors to a high-fat diet and stressful job, while Hillary’s blood clot to a grueling traveling scheduled which allotted her little rest and kept her sedentary.

Hillary’s “nights off”, or those rare evenings when she’s not on the road or work hasn’t followed her home, she likes to zone out to “brainless” movies, TV and spend quality time with the family. As she told Harper’s Bazaar:

“There’s no day that is the same as the day before. So you have to be energized; you have to be focused.” There must be days, though, when Clinton doesn’t want to get out of bed. “Oh, God, yes,” she says. “The mornings are okay, but by the end of the day, I’m sometimes so tired that I just go home, put my feet up, read magazines, watch TV, try to take my mind out of where I’ve been all day.”

Up until her mother’s passing in 2011, nights at home were spent watching TV together and venting about the day’s work. Favorite shows include House of Cards, HGTV’s Love it or List it and Grey’s Anatomy. Her mother used to force her to watch Dancing with the Stars, and even FOX News, so Hillary would know what the other side was thinking.

If Bill isn’t traveling, they might take a long walk with their dogs Tally and Maisie. Nowadays, quality family time usually takes place in New York where Hillary and Bill can visit their daughter Chelsea and beloved one-year old granddaughter Charlotte. 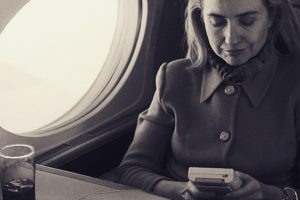