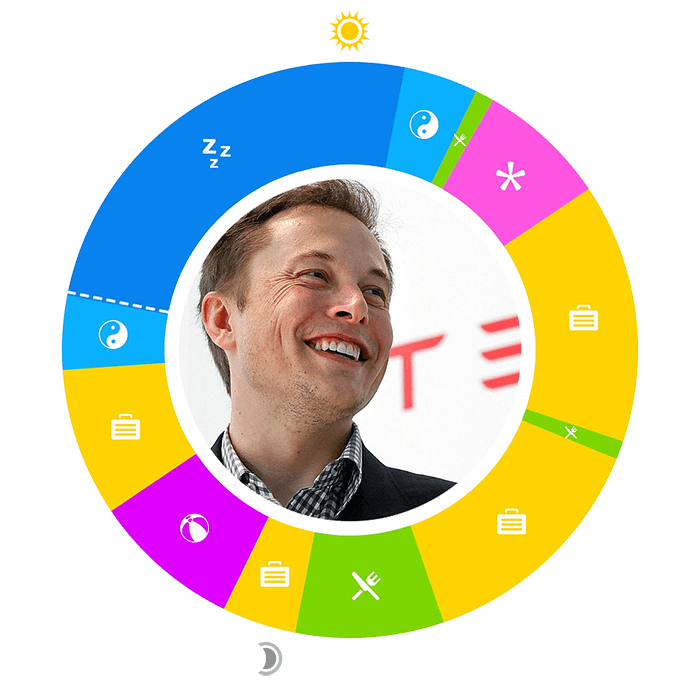 Day in the Life:
Elon Musk

Running a rule-breaking, physics-bending, industry-disrupting automobile company sounds like a tremendous challenge. Add a mission to colonize Mars, five beloved sons into the mix, and you have your hands full; unless your Elon Musk.

We examine a day in the life of Elon Musk by reviewing pools of first-hand interviews. Sources range from his Reddit AMA to Business Insider and Mashable.

Most days of the week, Elon wakes up in his LA mansion and makes the one hour morning commute to SpaceX in a Tesla Model S.

Elon frequently skips over breakfast because he “doesn’t have time”, save to grab a quick cup of coffee on his way out the door. He’s currently weaning down his caffeine habit to 2-4 cups a day, down from a peak of 8+ Diet Cokes and several large cups of coffee when he started feeling “wired”.

His staple wellness habit is a “shower” in the morning, which any late night hacker or early-stage entrepreneur might acknowledge is not always guaranteed.

A domestic workforce of nannies helps prep his sons for school.

Taking a page out of his favorite childhood book, Hitchhiker’s Guide to the Galaxy, Elon Musk navigates his way through space and time via the smartphone.

According to Elon, he types email “every interstitial moment” of the day on his smartphone. “Whether in a car, bathroom, walking, anywhere…”, without this he does not believe his lifestyle would be possible. He refers to himself as an “email expert” with “mad skills” – it’s his “core competency”. He prefers this mode of “asynchronous communication” for efficiency and being able to get stuff done on-the-go.

Generally, half his time in emails is spent on SpaceX and the other half on Tesla, regardless of his physical location. Phone calls occupy much of the AM and are generally directed to journalists, job candidates, or conference calls. In-person meetings take place primarily with senior engineering or marketing teams.

Knee-deep in meetings, Elon typically orders lunch delivery from local restaurants while he and his team continue throughout the afternoon. It usually doesn’t take him longer than “5 minutes” to swallow perhaps a chicken sandwich, veggies and a salad.

His favorite drink is Diet Coke. “They put something infernal in there so you never get sick of it.”

Elon walks the factory floor every day he’s at SpaceX. In his dual role as the company’s Chief Technology Officer, Elon still spends 80-90% of his time directly focused on engineering and technological challenges facing the team.

Again lumping meal time with work, dinner is where Elon admittedly consumes most of his calories. Reserved perhaps for VIP meetings or those a bit more intimate or relaxed in nature, multiple course meals include appetizers and last up to two hours. Favorite restaurants are barbecue and French.

Although not an every day occurrence, Elon made a recent New Year’s Resolution to “have more fun” and has been known to make the A-list Hollywood circuit. His sister Tosca Musk is a producer and director, and he himself has executive produced multiple films.

Other outlets for fun include company celebrations after successful events, i.e. rocket launches, and getaways at Coachella and Burning Man. Perhaps more regularly and true to his past, he’ll play favorite video games or build cool stuff around the house with his sons.

Usually there’ll be a pile of email left over to handle at the end of the day. Elon may multi-task while putting the kids to sleep, or nannies will handle bedtime duties… “it’s the only way I can get it all done.”

Elon was famous for putting in 100-hour workweeks and getting little sleep before he felt it “exponentially” damage him. He found that while he might stay up later, he sacrificed “mental acuity”. He now measures sleep with his trusty smartphone at a target average of 6 to 6.5 hours a night.