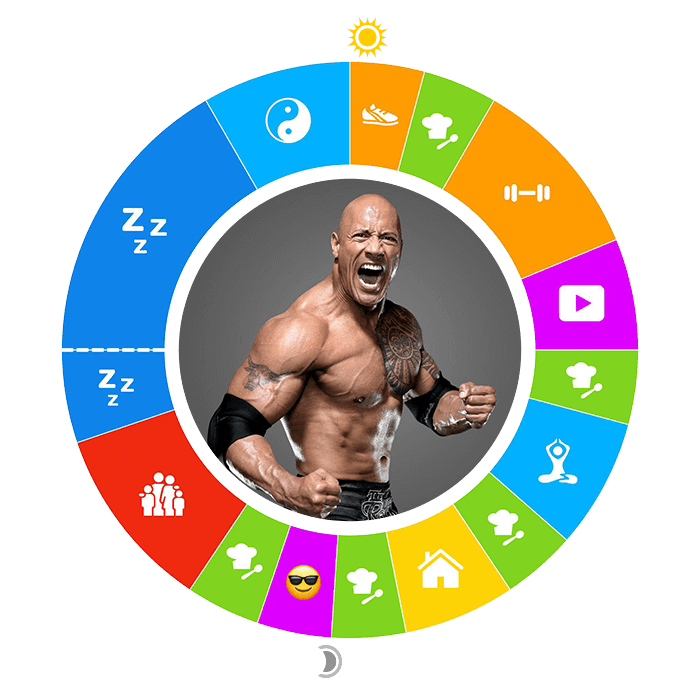 Day in the Life:
Dwayne “The Rock” Johnson

Dwayne “The Rock” Johnson became well known in the wrestling ring in the late ’90s and early 2000s and is an eight-time WWE/WWF champion. Since then, Johnson has often been cast as the action hero in films such as Skyscraper, Hercules, and The Fast and the Furious franchise, casually leaping on cars and saving humanity. Despite this, The Rock has also shown a softer side, leading in such films as Tooth Fairy, The Game Plan, and even more recently, singing in a popular animated Disney movie, Moana. In an interview for Moana, he says, “I have never cried consistently…through a movie more than I have with this movie…Just to be clear, they’re all manly tears though.”

No shame in shedding tears, Dwayne! Moana was a first for him, in that it was his first singing role. He admits that part of the way he prepared his vocal chords (and nerves, no doubt!) was with a little sip of tequila before singing. Although unconventional, his preparations paid off, as the song he sings in the movie, “You’re Welcome,” has earned platinum status for the Recording Industry Association of America. He is the father of three daughters, and evidently has a gentleness for youth.

He founded a charity for children, called the Dwayne Johnson Rock Foundation; its proceeds go toward the terminally ill and at-risk youth of America, further demonstrating that there is a soft center to his muscular and disciplined shell. In 2015, he was chosen as “Man of the Year” by Muscle and Fitness magazine and was listed as one of the “100 Most Influential People” by Time Magazine the following year, showing the reach and versatility of his influence. So, what we’re all wondering is: How does Dwayne Johnson stay in tip-top physical shape for his action figure body? What does a typical day look like for him?

Early to Rise for Exercise

Johnson gets up as early as 3:30 am to prep for his exercise. As he tells Bodybuilding, “I love putting in that hard work as early as possible to get my day started off on the right foot, mentally and physically.” He alternates between training on an elliptical machine and running through his neighborhood.

He gets up before sunrise in order to plan his day. He tries to have at least two hours of quiet before everyone else wakes up. With the house all to himself, he works out, meditates, and gets prepped for the day ahead. He has even developed an app called the “Rock Clock”  that wakes people up when he wakes up so they can also hit the gym or go for an early morning run.

Johnson has breakfast after his morning run, then gets right back to working out by heading to the gym to lift weights. Depending on the day of the week, he focuses his exercise routine on a different part of his body: “With the iron, I separate body parts: legs, back, shoulders, chest, biceps, and triceps. I mix up dumbbells, cables, barbells, and machines.”

On day one, he works out his legs, with workouts including squats, lunges, and leg curls.

On day two, he focuses on his back, with workouts including rows, pull-downs, and pull-ups.

On day three, he defines his shoulders, with workouts including raises, presses, and flyes.

On day four, he works out his abs, doing 4 sets of 20 reps of rope crunches.

He also works out his arms, with workouts including curls, overhead triceps, and triceps pushdowns. He is able to incorporate both the abs and the arms in his Russian twist, in which he does 4 sets of 20 reps as well.

He does about 4 sets of 12 reps with a brief rest in between each set with most of these units. On each day, he includes time to run on the treadmill for 30-50 minutes.

Johnson’s exercise regime and diet can also change depending on his next movie role. He states, “My workout is constantly fluctuating…Creating and maintaining these kinds of physiques takes attention to detail because sometimes you have to back off on cardio or add cardio or train two times a day or bump calories up or back off calories. It’s always in a constant state of flux, which makes it really exciting, for sure.” For example, when training for his role in Hercules, he worked out intensely for five days a week, still focusing on different body parts each day, but leaving two of the days for rest.

Diet: You Are What You Eat

Johnson eats a substantial amount of calories throughout the day—about five meals—to fuel his active lifestyle. His diet contains a lot of fish, particularly cod.  Sometimes he consumes as many as 36 ounces of fish on one day. He also eats as many as 12 eggs a day. He plans out his food ahead of time and makes sure the food that goes into his body counts for nutrition. “It’s all measured depending on what I’m training to achieve…Other staples in my diet include chicken, steak fillets…oatmeal, broccoli, halibut, rice, asparagus, baked potato, leafy salads, peppers, mushrooms, and onions, and then also some casein protein,” he tells Bodybuilding enthusiastically.

The Rock also enjoys the occasional “cheat day,” during which he doesn’t count his carbs. He can afford his indulgence in foods such as giant sub sandwiches as well as sushi rolls, peanut butter chocolate brownies, cookies, pancakes and a lot of pizza.

“I would never win an award for not loving pizza.” -Dwayne “The Rock” Johnson

Johnson has recently discussed his journey with mental health. When he was 15, he witnessed his mother’s attempt to commit suicide. Since then, he has struggled with depression throughout his life. He says, “I reached a point where I didn’t want to do a thing or go anywhere…I was crying constantly.” He has also had other moments of nadir in his life, including losing the prospects of a career in football due to an injury and his longtime girlfriend breaking it off with him. He says, “The dreams I had, they were dashed. There is no more football. My relationship was crushed. That was my absolute worst time.”

Dwayne Johnson has stated that men in our society, including an action hero like him, can be expected to deal with emotions internally and to not show them to others. However, as he aptly points out, “depression doesn’t discriminate” and it’s important to open up to others. Discussing the importance of verbalizing, he says, “I found that with depression, one of the most important things you can realize is that you are not alone.”

The End of Dwayne Johnson’s Day

Johnson takes time to unwind at the end of the day and reflect on how he can improve himself physically and mentally. When it’s time to hit the sack, he concedes that he doesn’t get very much REM and that his sleeping hours can be “funky and off.” He has stated that he only gets 3-5 hours of sleep a night! As he says, “I often sacrifice two hours of sleep just so I can have the quiet two hours that I need before the whole house wakes up, including the animals.” It seems like The Rock doesn’t need much time to rest before he’s vigorously back at it again, making one wonder if he really is some sort of superhuman or machine.

●  Day in the Life: Beyoncé