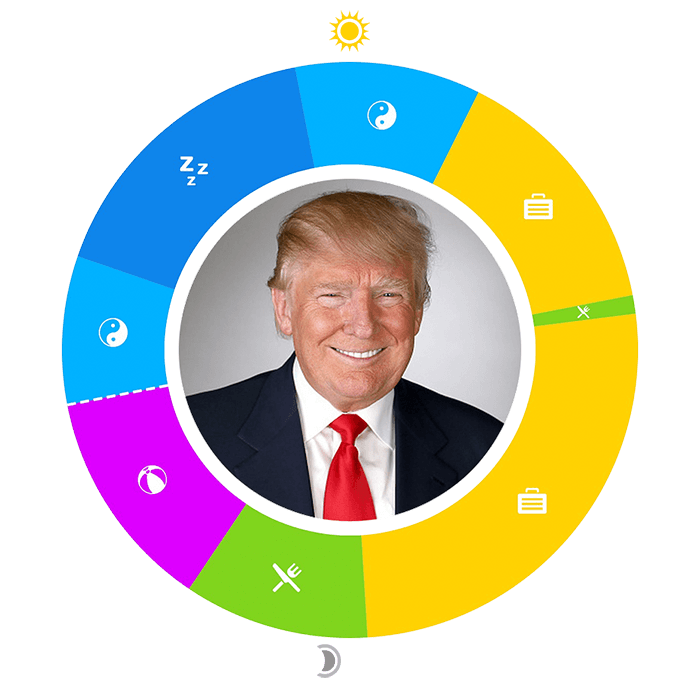 Day in the Life:
Donald Trump

While just yesterday he was host of the Celebrity Apprentice, firing Dennis Rodman for guzzling one too many cranberry vodkas, today he is the front-running Republican candidate for President of the United States. 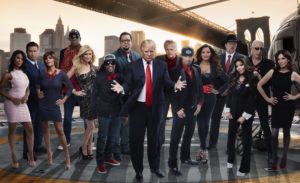 His net worth values at $3 to 8 billion dollars depending on the source (Forbes or himself respectively), but it still shocks some that his name is even in the hat. The reality is, Trump has expressed strong political opinions since at least 1987 when he took out a full page ad in the New York Times criticizing US foreign policy.

While his hankering for junk food and sedentary routine don’t really mark him as a wellness all-star, his incredible success as an entrepreneur and progress as a political force does put him in the spotlight. Here is the average day of Donald John Trump, father of five, grandfather of seven, and Chairman of The Trump Organization:

Wake Up and Do the Hair:

This is a ceremonial process for Donald, and despite all the jokes around it, anchors his day. In a 2004 interview with Playboy, Trump describes the ritual:

I get up, take a shower, and wash my hair. Then I read the newspapers and watch the news on television, and slowly the hair dries. It takes about an hour. I don’t use a blow-dryer. Once it’s dry I comb it. Once I have it the way I like it – even thought nobody else likes it – I spray it, and it’s good for the day.

No breakfast, no coffee. Even though he likes caffeine, Trump has never had a cup of joe. His first dietary intake for the day will be a Diet Coke around 1030AM.

Take the Elevator to Work: 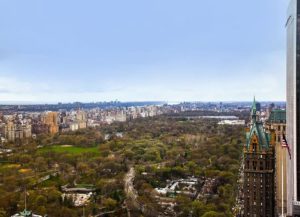 From the penthouse of the Trump Towers on Fifth Avenue in New York City overlooking Central Park, down to the 26th floor, Trump makes the elevator commute every day to his office. Even weekends, his children, three of which are now VP’s and co-workers, expect to find him there. The business day kicks off with a look in the PR mirror, as detailed by a biographer:

Trump begins each day with a sheaf of papers detailing where and how often his name has been mentioned in the global press. The reports are typically too numerous for him to actually read…

From there, it’s phone calls and business meetings, which according to Trump can number from 50-100 and 10-15 per day, respectively. Business meetings usually don’t last longer than 15 minutes and are not always planned:

I play it very loose. I don’t carry a briefcase. I try not to schedule too many meetings. I leave my door open. You can’t be imaginative or entrepreneurial if you’ve got too much structure. I prefer to come to work each day and just see what develops.

First Meal of the Day:

Long lunches last 15 minutes according to Trump and usually take place in the Trump Grill, at the basement of the same building. Standard fare includes an all-American cuisine of steak, cheeseburgers, fries, and ice cream. The Trump Burger and Trump Ice Cream are aptly named favorites, and you have to look pretty hard to find the healthy parts of the menu: 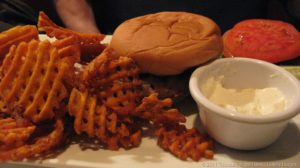 After the above gets washed down with a couple Diet Cokes, Trump gets back to work. If meetings last through the lunch hour, he’ll order ham and cheese or corned-beef sandwiches from nearby Carnegie Deli or pizza. Trump explains his appetite to Bloomberg in a 2015 interview:

I love steak and hamburger and pasta and French fries, all of the things that we shouldn’t be eating… Bacon, eggs, steak. You hear a report that comes out, and it says you can’t eat it and then you can, so I eat what I like.

To his credit, despite the trans fats, Trump has never smoked a cigarette or touched alcohol.

In the evenings, Donald leaves the office by 630PM and meets his wife, Melania, for dinner. Often, they will have social, business or charity engagements, sometimes multiple, to attend to… Favorite dinner dates are Regis and Joy Philbin: 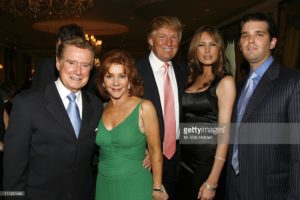 Little to No Sleep:

In one of his many books, The America We Deserve, Trump describes himself returning home from a black-tie dinner event and picking up potato chips and pretzels for a “real dinner.” He’ll munch in bed reading books or magazines. Two of his favorite writers are Socrates and Carl Jung.

Much has been made of Trump’s claim to sleep as little as 3-5 hours a day. Even scientists have weighed in on the likelihood of this claim, and whether or not it may be impacting his occasionally bizarre behavior. Some reports suggest his history with insomnia or lack of sleep may, at least at one point in time, have been related to amphetamine-derived diet pills.

The Mystery of Trump:

For all his talk about winning and never giving up, it’s interesting to note that Trump’s true passion graduating from college was making movies. After losing a $70,000 investment in his first and only play Paris is Out!, clearly regarded as a flop, he immediately circled back to the boroughs under the wings of his father to learn the family trade.

Perhaps it is this relentless passion for the limelight that has led the man to not only stamp his name worldwide on everything from buildings to neckties to bottled water, but to seek an office that will keep him front and center in the prime-time news. As ABC News analyst Matthew Dowd explains it: