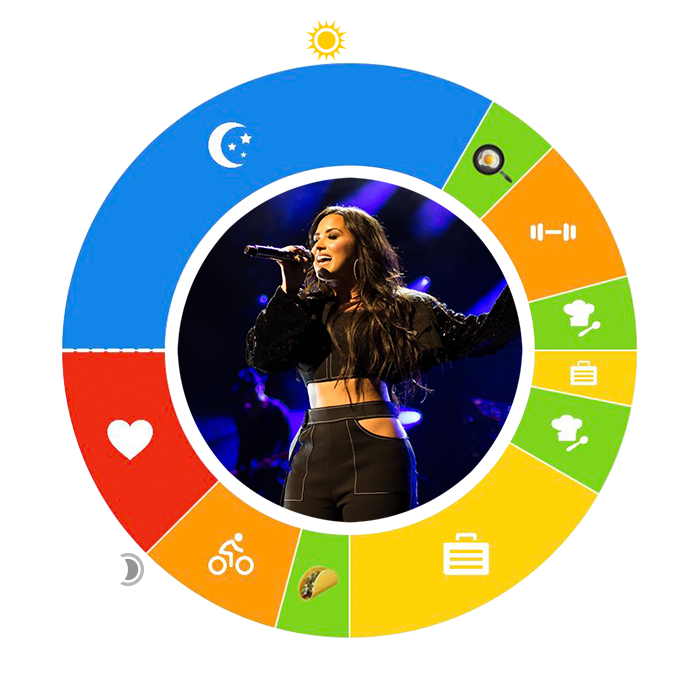 Day in the Life:
Demi Lovato

Pop singer Demi Lovato took the spotlight mid-January 2019 after celebrating her six months of sobriety after her overdose back in July 2018. Her openness about her struggle with mental disorders, substance abuse, and self-harm has given a voice to people who suffer from the same things. She has inspired millions to boldly turn away from an unhealthy lifestyle, both physically and mentally. She’s a powerhouse for political advocacy and a role model for many people who want to see positive change in their lives. As Lovato said just two weeks after her hospitalization, “What I’ve learned is that this illness is not something that disappears or fades with time. It is something I must continue to overcome and have not done yet.”

Through the years, Demi Lovato has become a woman of many passions. Not only has she produced multiple platinum albums, but her hit song “Sorry Not Sorry” also became #6 on Billboard’s Hot 100 list. Additionally, her album “Confident” was nominated for a Grammy in 2017, but that’s not all this singer has accomplished. She spoke at the Democratic National Convention in 2016, is a face of Skechers, and runs her own skincare and hair extensions line. She also voiced Smurfette in the 2017 animated film “Smurfs: The Lost Village.” In September 2017, she revealed her new role as a Mental Health Ambassador with Global Citizen. For her endeavors to destigmatize the conversation on mental health, she was awarded the Artistic Award of Courage, Mental Health Advocacy Award, and GLAAD Vanguard Award. Her 145 million combined followers show how loyal and supportive her fans are through her many achievements and efforts to remain healthy and happy. At the age of 26, Demi Lovato is already exhibiting her mark on the world.

While encouraging others to take back their lives, Lovato is a health and fitness champion and a body-positive influencer. She released a limited-time collection activewear clothing line with Fabletics and owes her recovery journey to regular exercise. You can always count on her to post motivational and uplifting captions and tweets. Many Lovatics (the name of her fan base) are energized by her and have been seen mirroring her daily routine. It only makes sense that we had to cover her day plan here on the blog!

Here is an inside look at Demi Lovato’s daily routine:

8 AM: WAKE UP AND EAT BREAKFAST

Lovato wakes up without hitting the snooze button at 8 AM every day so she can eat oatmeal, egg-white pancakes with applesauce, and fruit before her morning workout routine. Luckily, she has a personal chef to make her healthy meals. With her tight touring schedule, having all the help she can get lets her stay focused on producing hit songs.

Lovato says regular exercise gives her “energy and endurance.” With consistent exercise, she notes, “I feel so much stronger, and I’m much healthier.” On tours, she considers concerts their own workout, but when she’s not touring, she likes to work out once in the morning and once at night.

She partially credits her sober lifestyle to exercise. She would “be in a very dark place” without the gym, and says it puts her in a mental focus where every stress washes away. Friends of hers frequently comment on her “healthy addiction” to daily workouts because of her newfound love of activity.

Because of her past eating disorder, Lovato is on a meal plan. She enjoys four small meals a day and two snacks to learn portion control. She once stated her preference for food that either “grows from the ground or walk[s] on the ground,” staying away from processed foods, sugar, and flour. For her first lunch, she’ll eat a turkey lettuce wrap with vegan cheese and tomato, with sweet potatoes on the side.

For her second small lunch, Lovato will eat chicken stir-fry with brown rice and spinach.

Being a pop star isn’t easy. Lovato has to work hard every day, whether she’s touring or not, to be the icon we know her as. In the afternoon, she’s busy writing songs, recording, going to press conferences, acting in films, and raising awareness about substance abuse and the effects of negative body-image.

6 PM: DINNER AND A SWEET TOOTH

Pork tenderloin with green beans is her staple dinner, but her favorite thing to eat is ground turkey tacos with spinach and vegan cheese. When she has a sweet tooth, she loves cashews and dark chocolate.

Lovato likes to exercise twice daily. She’s working on getting her black belt in Jiu-Jitsu and especially loves spin. She has figured out a great routine that works for her and helps her have fun while doing it. While on tour with Christina Perri, Lovato mentioned that “Christina’s taken a ton of [SoulCycle] classes, and she tells me what to do. It’s super fun, and we usually drink a green juice or protein shake afterward and talk. It’s nice to get some quality girl time in, too.”

“GIVE YOUR HEART A BREAK” IN THE EVENING

After Lovato’s workout, she’ll relax, hang out with friends, get ready for the next day, and indulge in self-care. She really values self-care and loves how it has helped her on the road to recovery and a lifetime of healthy living.“I believe [self-care] is like a pyramid,” she said. “There are three things that you need to feel great. There’s physical fitness, nutrition, and mental health.” Demi Lovato continues to be a force for young generations, and we are “Confident” she will keep moving forward.