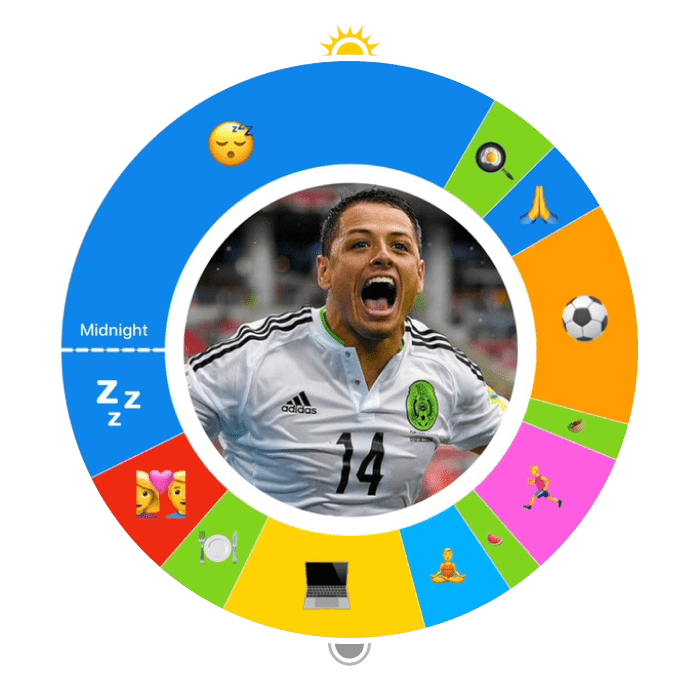 Day in the Life:
Chicharito

Javier “Chicharito” Hernandez is a professional soccer player who plays striker for West Ham and the Mexico national team. He has long been a standout on the Mexican National Team as he made his first appearance when he was just 21 years old. The now 30-year-old star is the country’s all-time leader in international goals scored and was featured on the 2014 cover of the FIFA video game. He gets the nickname from his father, Javier “Chicharo” Hernandez. Chicharo means pea in Spanish an appropriate nickname for his green eyes. Chicharito means little pea. Although Chicharito might be “little pea” in name, he is anything but small on the soccer field!

This World Cup, Chicharito and his Mexican squad have made it out of the group stage after defeating the defending champions, Germany, 1-0. Since he and his team have been playing so well we thought we’d look into what he does on a daily basis to become a better soccer player.

Here’s a look at Chicharito’s Daily Routine and his core values that make his game and body clock so strong.

Chicharito’s father Javier “Chicaro” Hernandez and grandfather Tomás Balcázar both played for the Mexican National Team. They were the ones responsible for getting Chicharito into soccer when he was seven years old. It took just eight years for his passion to turn into his career as he signed his first professional contract at the age of 15. Even though he was playing professionally, Javier furthered his education and enrolled in business administration classes at Universidad del Valle de Atemajac.

Hernandez’s career took off when he signed a deal to play for Manchester United of the Champions League. He played there for four years where he was a key component of their attack. Though Javier’s goal per minute production was off the charts, he struggled to forge a relationship with a new coach who was hired before the 2013-14 season. As the friction between the two increased, Javier saw his playing time diminish, ultimately driving him out of Manchester.

In 2014, Javier signed a season-long loan to play for Real Madrid. Despite playing well for Real Madrid, they elected not to extended his contract. This led to him signing a three-year contract in 2015 with the Bundesliga team, Bayer Leverkusen. The Bundesliga league is known for having the highest average stadium attendance in all of professional soccer and is Germany’s primary soccer league.

Currently, Hernández plays for the English club West Ham United. Although he was sidelined by a hamstring injury for a portion of the season, Javier scored eight goals in just twelve league appearances.

Chicharito followed in his father and grandfather’s footsteps and plays for Mexico’s national team. His first international experience came at age 19 when he played for Mexico’s under 20 team at the 2007 FIFA U-20 World Cup in Canada. Two years later he made his debut for the national team, and a couple games later he scored his first international goal for the team. Today he is Mexico’s all-time leader in goals with 50. These have come over the course of three World Cups, two CONCACAF Gold Cups, and two FIFA Confederations Cups.

Passion for the game

Hernandez’s passion for soccer is easy to see when you watch him play. He never stops moving on the field. This restlessness serves him well as he always seems to be in the right spot at the right time. When asked about his constant motion he responded by saying:

“I have a deficit. In Mexico we say ­hiperactivo—hyperactive­. I am hyper­active!”

Chicharito spends hours on his game every day. He does so to perfect moves so he feels comfortable using them in games. Javier told Sports Illustrated:

“You need to kick 300 balls [a day] to perfect something. It’s an education every day. You can always learn something new from football. If a player starts thinking they don’t need to learn? They are dead.”

Early in Hernandez’s career, he was a slim player. He knew that in order to compete in England where the play is faster and more physical he would have to add muscle to his frame. This led to him doing far more weight training and bodybuilding style workouts.

The weights have paid off for Chicharito. Not only was he able to add muscle and become a stronger player, but he also became a faster player as well. In the 2010 World Cup, Daily Mail investigated who the fastest players were. Sure enough, Chicharito was the fastest player clocking in at 19.97 MPH.

Part of his training regiment includes Javier studying films from all of his games and team practices.  He states “[it’s] not just watching the ball, and not just watching to enjoy the game” but rather to see where he’s able to improve.

Until the World Cup, Chicharito was avoiding red meat, but not for the reasons you may expect. He and the rest of the Mexican National Team weren’t eating red meat because the Mexican meat industry is known for producing meat contaminated with Clenbuterol. Clenbuterol is used to beef-up livestock (pun intended) but is a banned performance-enhancing substance for athletes.

Now that the national team is in Russia, red meat is back on the menu and the players couldn’t be happier. Javier has finally been able to fuel himself with his favorites meals: quesadillas and tacos.

Regardless of what Javier is eating, he’s known for adding his favorite condiment, hot sauce, on everything. He enjoys everything from milder traditional salsas to spicy chili-peanut sauces.

Javier is a devoted Roman Catholic and is seen on his knees praying before every game. He began this routine when he was actually thinking about quitting the sport when he was 20 years old. One year later he was playing for Manchester United and gives God the credit for allowing him to stay strong and persistent.

Today, Hernandez says he prays to say thank you. He told Sun Magazine:

We’d like to congratulate Chicharito and the rest of his squad on a great performance this World Cup!