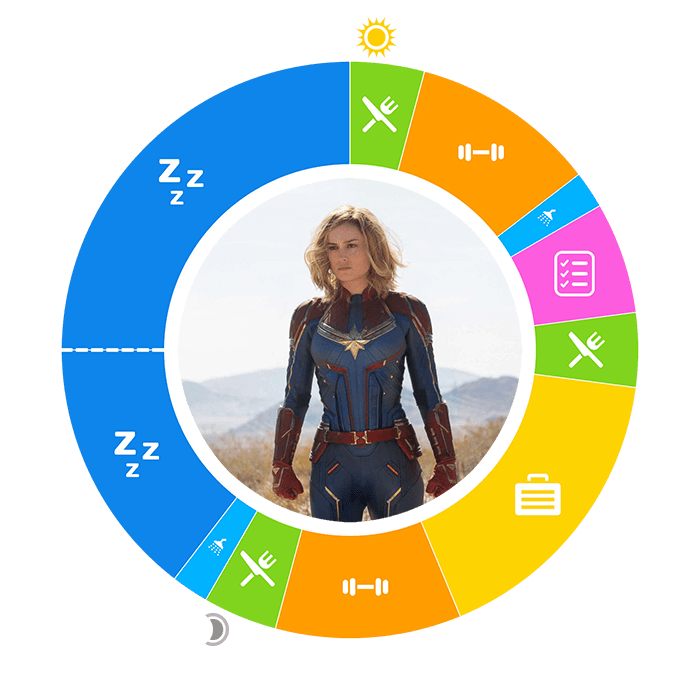 Day in the Life:
Brie Larson

Academy Award-winning Hollywood actress Brie Larson rose to stardom after gaining critical acclaim and awards for her role in the movie Room. Interestingly enough, she started her career at a young age when she was endeavoring to be a pop star. She got signed by Universal Records and even went on tour with Jesse McCartney. Larson, however, found a bigger passion for acting starring in Sleepover (2004), HBO’s United States of Tara (2009-2011), The Spectacular Now (2013), and a Disney Channel Original Movie called Right on Track (2003).

Her lengthy and impressive resume landed her in the Marvel Cinematic Universe as Carol Danvers, aka Captain Marvel. Therefore, she had to get into kick-butt shape, making training and exercise a part of her daily routine. Her dedication and hard work to her role as Captain Marvel and the release of the new Avengers: Endgame film made her an obvious choice to highlight on our blog!

The Strongest Woman in the Universe

For a woman to save the world, she has got to be in tip-top shape! Therefore, Larson’s trainer, Jason Walsh, made extreme strength a top priority. Her workout routine included crazy stunts like pushing a Jeep for a whole minute or hip thrusting a 400-pound barbell. That type of strength does not come in a day and her trainer made sure she got to peak strength in an efficient and, most importantly, safe way! Larson actually did her own stunts in the film which means she had to know how to punch, kick and fight with strength, confidence, and complete control.

“If you’re going to play a superhero, the character building starts with what we were doing. You’ve got to believe that you have superhuman strength.”

When Larson first started her fitness routine for Captain Marvel, she focused on the basics like fixing her body’s asymmetries and finding her physical weaknesses. It took months of the basics in order to graduate to her fight choreography and hours of intense training in the gym.  Luckily, for Larson, it wasn’t her first experience lifting heavy weights and getting into a particular shape. For the movie Room, Larson had to gain 15 pounds of muscle and achieve an undernourished look.

Give them strength and watch them fly. Brie is legit! She earned every bit of it through blood, sweat, dedication, and yes, tears. Couldn’t be prouder. @brielarson #strongwomen

Even Superheroes Need to Eat

True health and wellness always come down to how you fuel your body. As I am sure many of you know, you can’t out-train a bad diet, even when you have the best personal trainer money can buy. When Larson was training for her role in Room, she only ate the bare essentials to get nutrients to finish her workouts. Her diet included mostly almond butter, chicken, and fish. Her diet at the time helped her portray an undernourished woman that was held captive for seven years.  Conversely, for her role in Captain Marvel, playing a superhero meant Larson achieved a super metabolism!

Breakfast with Jennis by @jennisennis

Thusly, Larson’s diet was completely different when fitting into the role of Captain Marvel. Her intense training routine meant she was burning off a ton of calories during the day. To make up for it, she upped her caloric and carbohydrate intake! Carbs give your body glucose and that glucose is used to produce energy for your body. When building muscle, Larson’s body got better at processing carbs, efficiently getting glucose into her system, in order to improve her body and brain function. When it comes to eating healthy, carbs usually get a bad rap, but when carbs are incorporated into your fitness routine, correctly, they become a key part of a diet and fitness plan!

While many people may have a goal to be a part of the Marvel Cinematic Universe, it is truly attainable for a few people. This is why Brie Larson stands outs.  Her determination and strength of body and mind prove why she was right for this role.

“It doesn’t matter to anyone else, but it did to me. Breaking that boundary of what it means for a woman to be muscular and strong and own your body and use it as a tool, that felt meaningful.”

Thank you, Brie Larson, for breaking boundaries with your super strength!

●  Day in the Life: Dwayne “The Rock” Johnson