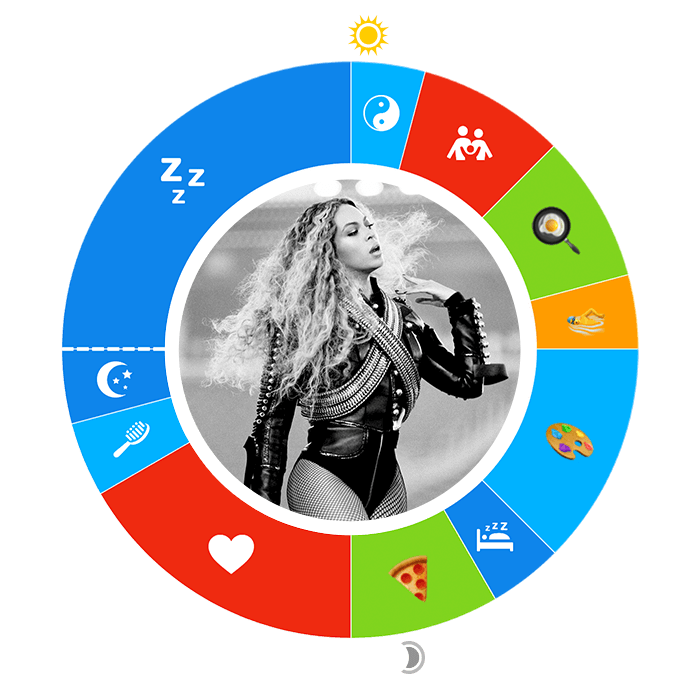 Day in the Life:
Beyoncé

You have just as many hours in the day as Beyoncé, or at least the saying now goes…

The difference may be that you don’t have a net worth of $250 million, international superstar status nor a 24/7 entourage of assistants, chefs and personal trainers. Not to mention a helicopter, private jet, or yacht…

Nevertheless, Beyoncé will be the first one to remind you that she didn’t start out this way. From the age of 9 years-old, she worked her way to the top with her mother and father’s vigilant guidance. If you ask how she’s managed to win 20 Grammy’s, produce six platinum albums, perform in multiple A-list films, run a successful clothing line, perfume business and multiple charities — oh, and raise three beautiful children — Beyoncé will give you these two answers: 1) “I am blessed” and 2) “hard work”.

While most “behind-the-scenes” footage of the superstar is carefully curated by her proprietary production studio, Parkwood Entertainment, multiple independent interviews and biographies confirm that she is indeed a hard worker. Kelly Rowland, her childhood friend and Destiny’s Child co-star, remembers Beyoncé staying up until 4AM the night before concerts perfecting routines and performing tasks as menial as fixing a costume button.

Beyoncé’s younger sister, Solange, remembers the star perfecting a single line of a song in her bedroom over and over late throughout the night. It’s safe to say Beyonce’s self-characterization as a “workaholic” and “type-A personality” is accurate.

It is important to note that since her marriage to Jay Z in 2008 and birth of their daughter Blue Ivy in 2012, and on the persistent advice of her doting mother, Beyonce has made conscious efforts to balance work-life priorities:

I’m starting to live and pay attention. The one thing I’m trying to learn is time management. It’s the hardest thing for me. Taking my time, and doing things at a slower pace… It’s hard because I have to plan, but I’m working it out, I’m going to get there… My daughter has been my balance.

Beyonce will balance seven days of work with a dedicated day off, or two months of tours with two full weeks off, and even took an entire year off in 2010 before producing her hit record album “4“.

Downtime is typically spent with her husband and children at their home base in Los Angeles, CA.

On those special Sundays, when not editing her latest footage on a private plane with Final Cut Pro, or packing for an overnight flight to her next tour stop, here is her ideal day:

Beyoncé’s normal work routine is so intense, she admits on days off she just “drops my shoes, and that’s it”. In other words, she’s “lazy” on these precious days.

After waking up, the same way she begins each performance, the superstar will pray and give thanks to God for all her blessings, while “breathing out anxiety, breathing in positivity”. Her and her husband’s interest in meditation has grown over time, as Russell Simmons reported on the Huffington Post.

When alone and traveling, her favorite way to re-center is through a video diary:

The camera in that computer has been my friend. When I’m away, and I’m alone, and I need to talk and I need to heal myself. Because you hold so many thoughts… your mind… It’s my diary.

If Beyoncé had a dime for every time she was asked how she worked out her booty… well, she may not have to sing for a career anymore. It turns out the answer is simple: squats. “I hate them, but they’re the best.” On busier days, the singer performs them during interstitial moments and will go three minutes straight (or until she burns out) to hit around 100 in a row.

Given her shows are 2 hours plus long, during tours she usually counts these performances as her workout plus or minus the squats. In support of Michelle Obama’s Let’s Move Campaign, Beyoncé provided a little more color on what a full at-home routine looks like (see Instagram video above).

Less for its booty-enhancing effects and more for the love of the sport, swimming is one of Beyoncé’s favorite forms of exercise. It ties in with her greater love of the ocean and being by or in the water… “I’m born again when I get out of the ocean. I’m always happy when I’m surrounded by water.”

Related, the star couple’s preferred mode of holiday is on a boat. Favorite yachting destinations include: Croatia, Phuket and the Maldives. Not only is it a chance to escape from paparazzi, but as the singer puts it, being “stuck” on a boat forces her to relax, “I don’t know how to relax. I don’t like to get a massage. The only time I can really relax is on a boat, because then I have no excuse.”

The classic self-recorded snippet of her and Jay Z from their documentary Life is But a Dream along their favorite coastlines of Croatia, sums it up pretty nicely (see YouTube video above).

Much has been made of Beyoncé’s weight loss tactics and recent vegan exploration. Make no mistake, Beyoncé still eats meat and breaks for Popeye’s and Hamburger Helper, but nevertheless continues to make an earnest attempt at a plant-based diet:

A classic meal breakdown for the actress is pretty disciplined. Her “normal” diet during the week typically includes: cereal for breakfast, her favorite is Strawberry Special K Flakes, a sandwich for lunch, and fish and veggies for dinner. Favorite snacks include edamame. Only beverages are Crystal Light and water, usually in the form of Pellegrino.

Sundays are her “cheat” day, in which she indulges in her fave: pizza w/ extra tomato sauce and jalapeños. Another indulgence of choice is butter pecan ice cream.

Family is at the core of Beyoncé’s story, and she constantly mentions it as her guiding force. Her number one personal assistant is her cousin. She spent most of her year off with her nephew. Her mother accompanies her to almost every major interview and on worldwide tours. Her father managed her directly for over a decade. Even from remote distances and with hectic traveling schedules, she’ll make a point to Skype with Jay Z – like on their Valentine’s date when she was in Peru and he was flying from Denver to London. Beyoncé also places strong value on her friendships and sisterhood:

Beyonce has a conflicting track record on sleep, as do perhaps most type-A, rock star, super-successful high flyers. She has been quoted as saying “I don’t need sleep” in the past, and suggesting that if she doesn’t sleep her team should follow suit. Given that her tours include an entourage of over 150 staffers, some of whom have been loyal for close to 10 years, it’s easy to imagine not everyone can keep up.

Indeed motherhood has softened her stance, and her recent line of thinking on the subject is more in line with a balanced approach:

I am a person who has a hard time shutting off my brain. But if you are active during your day, you will be so exhausted you can’t help but fall asleep. Having peace, happiness and healthiness is my definition of beauty. And you can’t have any of that without sleep.

She has also made a name for herself by being a class act celebrity, not known for late-night party rages and generally holding a curfew of 11PM.