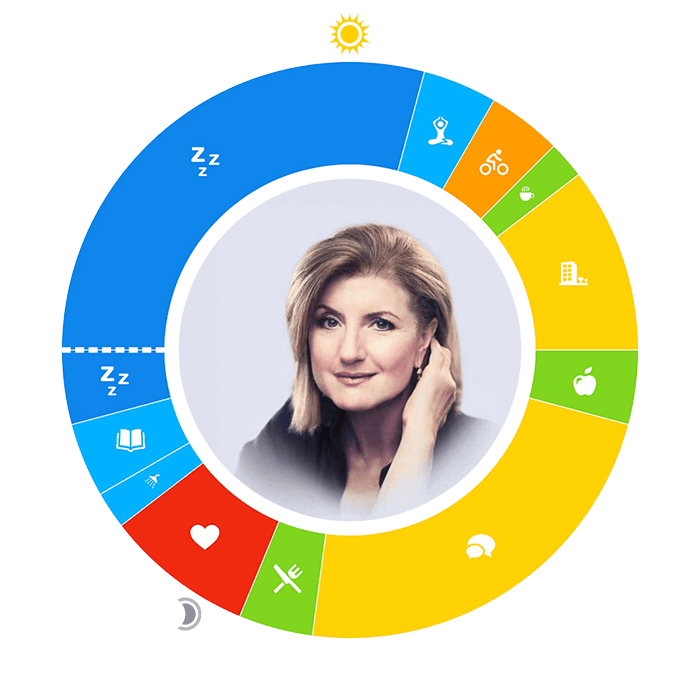 Day in the Life:
Arianna Huffington

Arianna Huffington is the founder of The Huffington Post, the founder and CEO of Thrive Global, and the author of 15 books, including, most recently, Thrive and The Sleep Revolution. In May 2005, she launched The Huffington Post, a news and blog site that quickly became one of the most widely-read, linked to, and frequently-cited media brands on the Internet. In August 2016, she launched Thrive Global, a corporate and consumer well-being and productivity platform with the mission of changing the way we work and live by ending the collective delusion that burnout is the price we must pay for success.

She has been named to Time Magazine’s list of the world’s 100 most influential people and the Forbes Most Powerful Women list. Originally from Greece, she moved to England when she was 16 and graduated from Cambridge University with an M.A. in economics. At 21, she became president of the famed debating society, the Cambridge Union.

She serves on numerous boards, including Uber and The Center for Public Integrity.

Her last two books, Thrive: The Third Metric to Redefining Success and Creating a Life of Well-Being, Wisdom, and Wonder and The Sleep Revolution: Transforming Your Life, One Night At A Time, both became instant international bestsellers.

She is a mother, sister, flat shoe advocate, and sleep evangelist.

Great time with a group of visitors from Brazil in the @thrive pop-up store (only open for two more days). We're standing in front of my favorite Gordon Parks photograph (of a boy with a June bug)—tomorrow it goes back to my bedroom ?

Arianna believes her day “starts the night before.” She prioritizes getting eight hours of sleep, because “… my whole day is transformed and infinitely more effective.”

It was a hard lesson learned when she collapsed from over-exhaustion and lack of sleep in 2007, suffering a broken cheekbone and deep cut over her eye. Arianna, who had been working 18-hour days building the Huffington Post, was terrified and told People magazine it was the “wake-up call that changed my life.”

Happy #NationalNappingDay! Here’s one way to block out the light for a quick nap (I’m one of the few authors who takes it as a compliment if my book puts you to sleep!)

Now, when she wakes up, Arianna “puts her own mask on first” (using the airplane analogy), and begins the day by meditating. She will then spend about a half hour on a stationary bike while catching up on the news in her bedroom, and finally ten minutes of yoga poses if time allows. While traveling, she’ll use the hotel gym.

Next, she’ll arrive at her office with a dose of caffeine, usually in the form of Bulletproof Coffee or cappuccinos with almond, soy or coconut milk. Breakfast might be two poached eggs or oatmeal. In an earnest attempt to better emphasize a well-rounded breakfast and healthy morning, her team at Thrive Global recently partnered with Quaker Oats.

At the office during the day, Arianna’s usually in and out of meetings, and currently focusing on international expansion.

After a long day of work, Arianna prefers to decompress with her loved ones, which she calls her “Thrive Tribe”. This includes her two daughters, Christina and Isabella, and her sister, Agapi.

“Spending a little time with them is just something that nourishes me.”

Thank you to my babies, my Thrive Global family, and all my friends for your love and birthday wishes!

Finally, Arianna will deliberately and methodically transition into sleep mode with the respect of a “sancrosanct ritual”. As she describes:

First, I turn off all my electronic devices and gently escort them out of my bedroom. Then, I take a hot bath with epsom salts and a candle flickering nearby; a bath that I prolong if I’m feeling anxious or worried about something. I don’t sleep in my workout clothes as I used to (think of the mixed message that sends to our brains) but have pajamas, nightdresses, and even T-shirts dedicated to sleep. Sometimes I have a cup of chamomile or lavender tea if I want something warm and comforting before going to bed. I love reading real, physical books, especially poetry, novels, and books that have nothing to do with work.