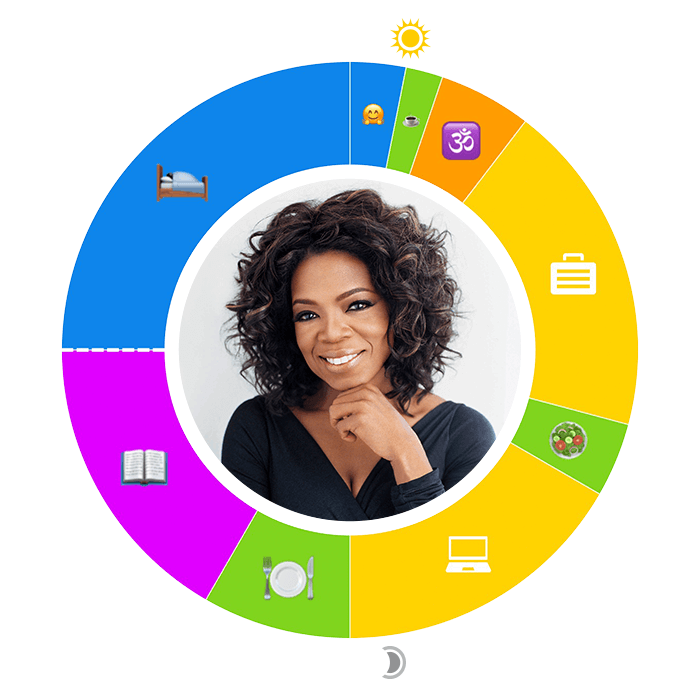 Day in the Life:
Oprah Winfrey


Oprah Winfrey has been a household name for over 30 years. She entered televisions sets with The Oprah Winfrey Show, received Oscar nominations for her evocative role in The Color Purple, produced countless movies and tv shows, launched a magazine in her image, and has her OWN TV network. Worth 2.8 billion dollars, Oprah even has an “effect” named after her, because her influence has inspired many to pick up new books and seek healthier lifestyles. She has inspired us with her stories of overcoming adversity and her own philanthropy. It’s been nearly seven years since The Oprah Winfrey Show has ended, yet her effect still lives on. And entering into 2018, she gave a Golden Globe speech that touched many and reminded us why she is so beloved. She sparked a glimmer of hope that have some chanting Oprah for President come 2020.

How does Oprah do it all in 24 hours?

How does Oprah get limited to the same amount of hours in the day as us and achieve so much? What’s Oprah’s daily routine?

The acclaimed poet Anne Sexton, once wrote, “Saints have no moderation, nor do poets, just exuberance.” The same can be said about Oprah. She does not believe in alarm clocks, and opts to wake up mindfully without the intrusion of harsh alarms.  In her own words;

“… [alarm clocks] make me agitated. Everything begins and ends with stillness: a conscious awareness of my presence within the greater presence of all, whether I’m paying attention to the way the sun’s rising, or whether it’s misty out in the morning on the trees. When I wake up now I have the privilege of listening to real Twitter.”

Based off her interview with the Hollywood Reporter, we are able to learn how Oprah utilizes mindfulness throughout her day as a foundation to build the success and inspiration she brings to her viewers and fans.

She likes to visualize the hour she wants to wake up before going to bed and wakes up around 6:20AM. This is also the time her dogs wake up and can give her a loving jump to the day.

Cappuccino or Tea time: 645AM

For an extra pump, Oprah either chooses to drink tea or make a cappuccino. She especially likes to ground herself for the day in those minutes that the water boils to center herself with quotes. “When I’m standing in the kitchen and waiting on my tea to brew, I’ll read one [quote] for every minute it takes to finish brewing. Everything from Gandhi to Thoreau.”

Having worked out her mind, Oprah then works out her body. For 20 minutes she will run on the elliptical, then walk on an incline for 30 minutes on the treadmill. She finishes off her cardio with sit ups.

Happiest moment of the day: finishing the workout I didn't want to start.

Between her workout and breakfast, Oprah takes the time to meditate. She believes meditation and breathing exercises allow her to mentally prepare for the day. She alternates between walking and sitting meditations. On a relaxed day, she uses a full 20 minutes to meditate. When she is traveling, she shifts down to 10 minutes. She once shared that she “[will] close the door, wherever I am—at my old office in Chicago, I’d literally go in the closet—and just sit and breathe.”

Being on Weight Watchers, Oprah eats medium boiled eggs with a piece a multigrain toast while looking over her plan for the day.

During this time Oprah works on her financial affairs with her east coast team, focusing on calls and video conferences.

Less than two hours until @oprah makes her @60minutes debut. Our fearless leader sits down with a panel of Americans with divergent political views to discuss the future of the nation. Will you be tuning in tonight at 7:30 PM EST? 📺

At 1pm she focuses on an hour for lunch. She usually opts for a light lunch consisting of soup and salad. Having a green thumb herself, Oprah takes pride in eating vegetables from her own garden. When there is an overabundance of vegetables, she likes to take to the streets of her own neighborhood and hand out vegetables to her neighbors.

This makes me so HaPpy! Just picked. Wishing all kinds of bountiful harvests to you all. #harvestday

The bulk of her work happens during these hours, focusing on marketing meetings about the series Greenleaf from her network OWN and going over script notes.

Writers room with a couple of stray producers.#greenleaf

Oprah enjoys staying engaged with the meals she prepares. As a slightly chaotic cooker, she likes to guesstimate measurements in her recipes. She fully admits that if she entertains more than four  people, she seeks a chef to do the cooking. She sticks to one  protein, two  veggies, and a carb.  She has come to know that her body needs a carb or it turns on her!

By 8pm, Oprah is reading the next new novel or script to enter our hearts.

Everyone has a nighttime routine—turns out @oprah's involves two giant pigtails to keep her hair from tangling! What's your #bedtime ritual? #hair #omag (📷 @gayleking)

Before bed, Oprah journals at least five  things she is grateful for.

After journaling, Oprah slumbers and wakes up excited about a new day.

Oprah’s work has touched nearly every household, be it through our TV sets, word of mouth, or social media. Her limitless passion is the cornerstone of her success. Oprah helps millions of Americans feel better on countless of occasions, including most recently her inspiring #TimesUp speech at the 2018 Golden Globes. Even today, years after the culmination of her renowned TV show, she is still contributing to the public’s conscious growth, sense of wellness and personal esteem. We now know it all starts with her being present daily and setting an example of mindfulness. Seeing how Oprah organizes her day, and accomplishes so much, inspires us to take it one breath at a time.