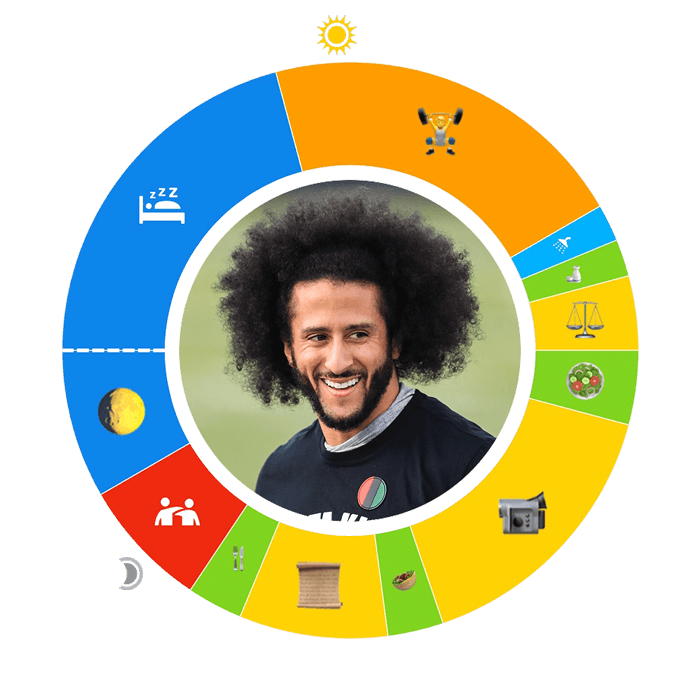 Day in the Life:
Colin Kaepernick

I remember the time when media outlets were flooded with news about Colin Kaepernick and his sit down during the national anthem. To me, it seemed reasonable for him to do what he did. Oftentimes, in high school, I sat down when people were reciting the pledge of allegiance. It just seemed ridiculous to pledge allegiance to a nation that did not respect all members of its society. To see Kaepernick do what he did, it was empowering and inspiring. He risked everything by doing that, and he put human lives before his career.

Before I knew it, this non-football fan was reading up on a football quarterback. What was even more incredible is that he continued to sit down for the rest of the season; this led to him becoming a free agent the following season and up until now. Despite the backlash that he has faced, he continues to fight for civil rights and hopes that he can play football again with a team that accepts every part of him.

Despite being a free agent for the past 4 years, Kaepernick has kept up with his workouts. He works out 5 days a week at 5 am. His workout is a mix of bench presses and resistance training. This workout lasts for 4-5 hours at a time. His persistence is incredible. He still adheres to most of his workout routine from his time in the NFL. For more details on his workout and to possibly get into shape like Kaepernick, check this out!

Munchin’ for the Crunchin’

After working out like he does, it’s essential that Kaepernick is eating well. Kaepernick is a conscious eater as well as a conscious activist. He has been vegan for several years now and advocates for animal rights as well. He recently partnered with Impossible Foods to give away one million Impossible Burgers to people in need amidst the pandemic. People think that a vegan diet means losing out on protein, but looking at Kaepernick, it’s definitely easy to say that he’s getting more than enough protein.

When it comes to food, Kaepernick is aware of the food insecurity that exists in America. Whenever he can, he takes action and provides food for those in need of it. Especially during a holiday, you may find him serving food and reaching out to people.

Kaepernick was adopted and raised by his parents, Rick and Teresa, who are both white. His parents have supported his stance against racial inequality. Even though Kaepernick grew up in a white family, he still faced a lot of racism. Although his family encouraged him to embrace his identity, he has faced a lot of hate from the general public. This is very disheartening. It’s incredible that despite the haters, he has immense support from his fans and loved ones.

Thank you @TylerPerry for sharing this historic moment with us! What you have accomplished has left us all so proud. ?: @ravisionmedia @djtonedef

Nessa Diab, his girlfriend, has been a huge source of support for Kaepernick for several years. Like Kaepernick, she has been the subject of hateful comments and discrimination. As a brown and Muslim woman, she has been an active proponent of the Black Lives Matter Movement and has supported Kaepernick’s activism work.

Kaepernick put ‘we’ before ‘me’; he put the needs of the collective above his own. He was a successful athlete who had all the power and money in his hands, but he realized true purpose comes from standing up against injustice. Kaepernick has donated millions of dollars to several organizations that align with his beliefs regarding civil rights and equality. In addition to this form of activism, he has also been working with filmmaker Ava DuVernay on a documentary project that will show his life journey towards becoming such a fearless activist. His reasons for protesting are perfectly summed up in this quote:

“I am not going to stand up to show pride in a flag for a country that oppresses black people and people of color. To me, this is bigger than football and it would be selfish on my part to look the other way. There are bodies in the street and people getting paid leave and getting away with murder.”

Mucerino, C. (2020). Colin Kaepernick is fitter than ever on a vegan diet, but will he get picked up? Retrieved from https://thebeet.com/colin-kaepernick-is-fitter-than-ever-on-a-vegan-diet-but-will-he-be-playing/

Orr, C. (2019). Inside Colin Kaepernick’s workout: How did we get here and what happens next? Retrieved from https://www.si.com/nfl/2019/11/17/colin-kaepernick-nfl-workout

TMZ Sports. (2020). Colin Kaepernick still training like a maniac…to play in NFL in 2020. Retrieved from https://www.tmz.com/2020/06/08/colin-kaepernick-training-workout-nfl-roster-kneeling-protest-roger-goodell/